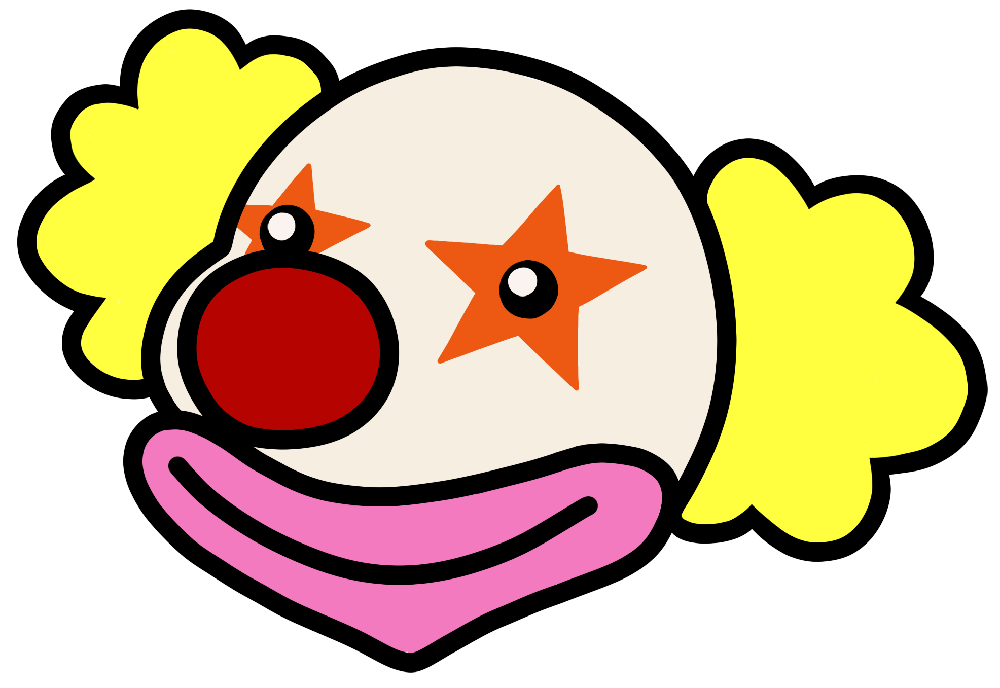 I don’t know why I made this or why it’s been sitting on my hard drive for almost ten years, but I do know that I’m way more excited for that new Space Jam movie than I was before. 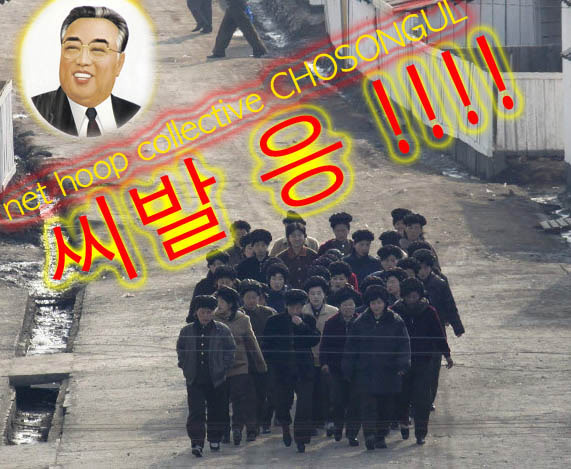 For some reason I couldn’t really find any good-quality pictures of the greatest console mascot, Mr. T from the FM Towns Marty, on the internet. Even Bonk is available in higher resomolutions, which is a disgusting miscarriage of justice. So anyway, I was bored and decided to just draw Mr. T in the quality which he is deserving of, which I am not actually capable of but whatever. 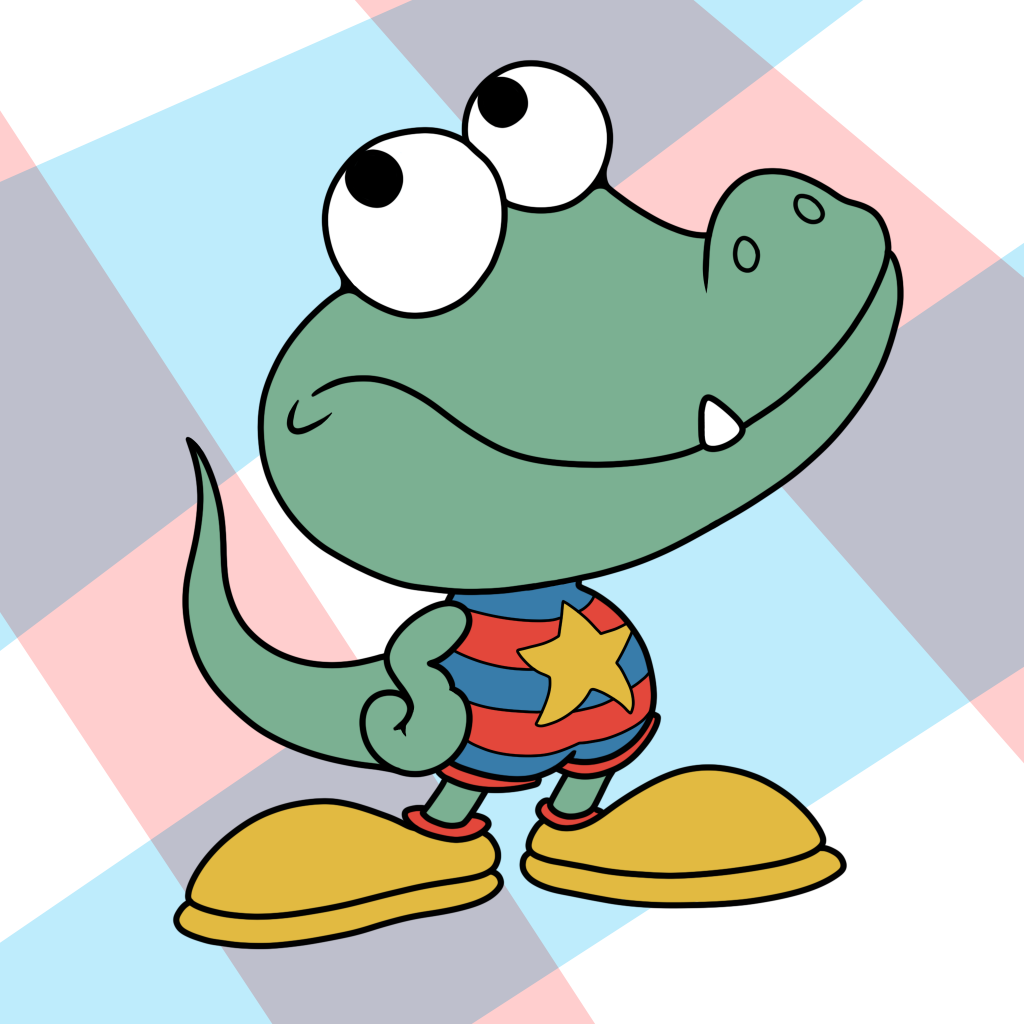 Here is a PSD so you can bop away the background and have a nice day. 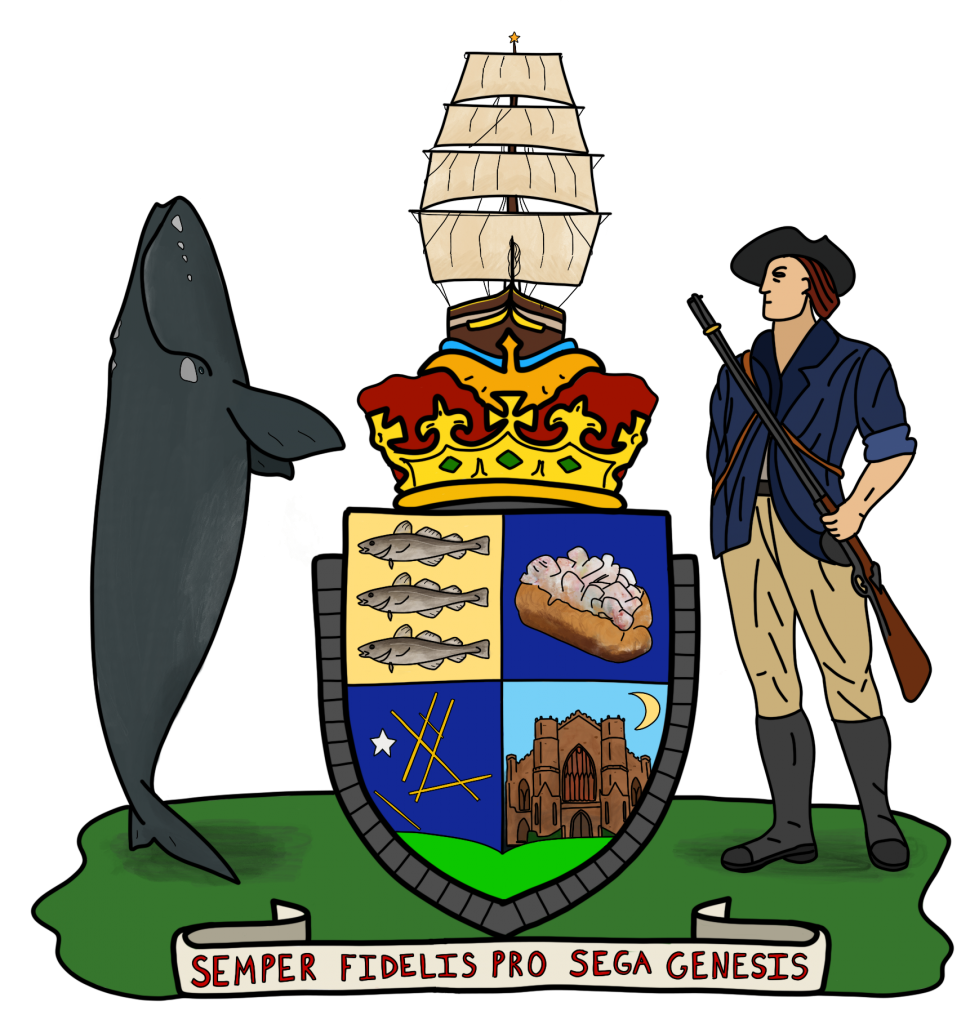 The Royal Warrent of Salem, MA, by appointment to HRH the King of Same. 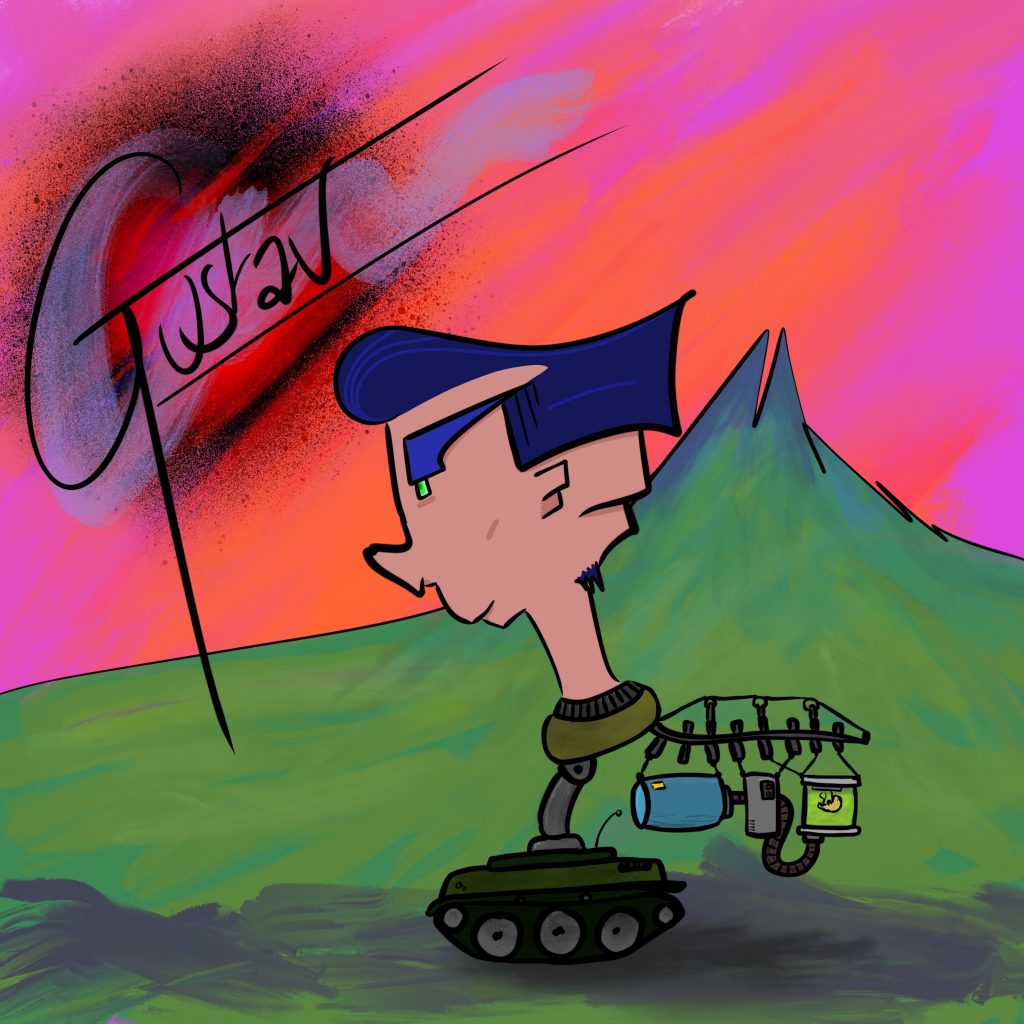 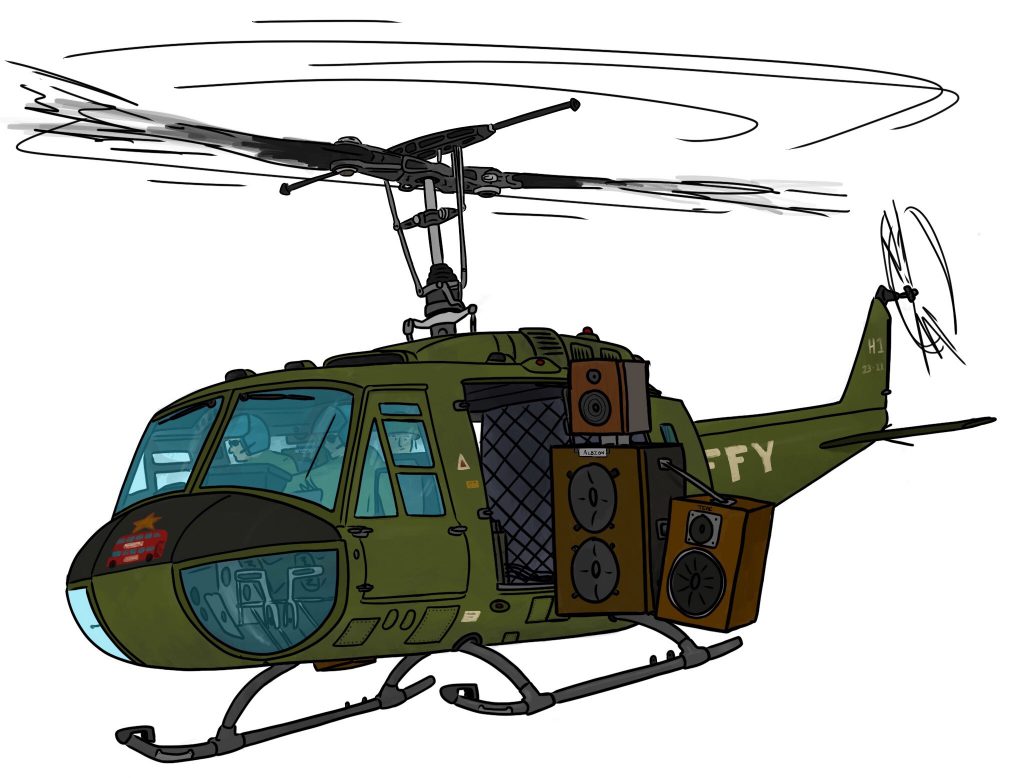 Note: This is a JM Classique™ post. Photobucket are monsters and broke image links from ten years ago, removing the images from old forum posts. Since I’m going through each old post and re-hosting the image on this server, I figured I might as well shove the post here, too. JM Classique™: Your Trusted Brand of Yestercrap.

During the Great Depression, a tiny gentleman of unknown origin (having been fired from his job as a drill bit at Consolidated Telegraph & Armament) decided that the real money was on vehicles that have food within them, an unknown concept at the time. Fine society reacted with horror as the tiny gentleman carried ingredients on board his custom-made bus; shocked were those who witnessed him grilling a fish inside of it! However, within five years the name of Codpiece Feeshbus was known throughout the land (no doubt helped by its famous advertising slogan “Codpiece Feeshbos — Invast in Ameerica — eh fish BOS”), and it became but the first of a fleet of enfooded conveyances the likes of which had not been seen before, even by Lord Protector Saumarez. Thus, it is only fair that we begin our examination of food trucks of the Open West with the first — Codpiece Feeshbus. 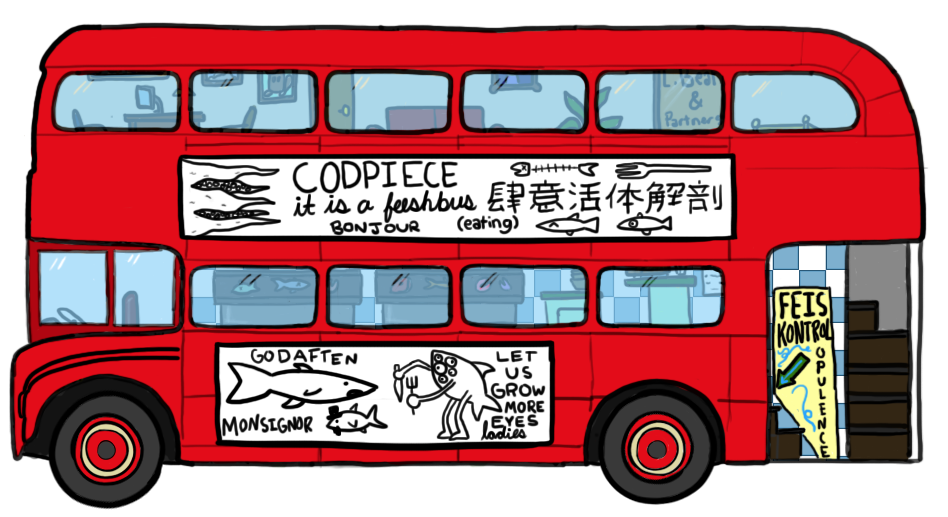 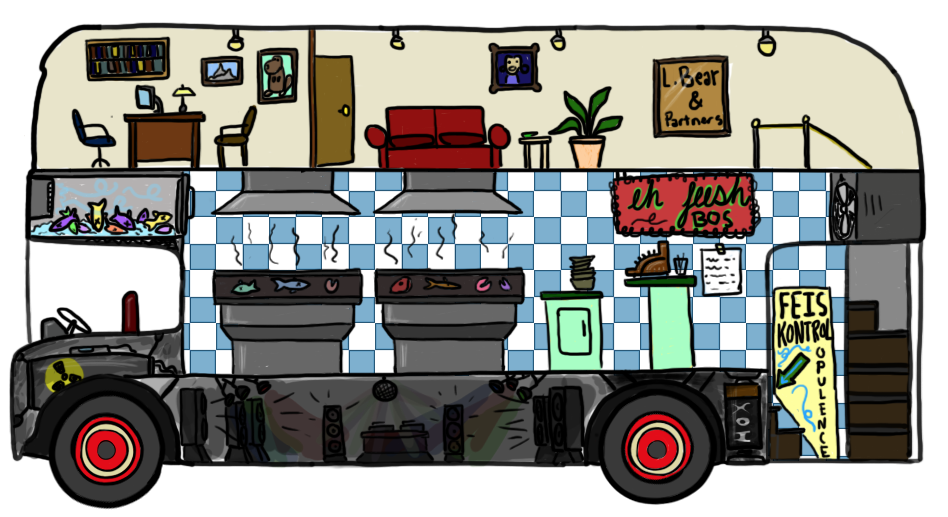 The custom Feeshbus was constructed out of polyrods and unibars and The Colonel’s Own Dimensional Aluminum, such that the different levels could be scaled in realtime to meet customer demand. This allowed for the inclusion of three levels. The primary level, in the middle, is the bus’ raison d’être — the restaurant itself, complete with state-of-the-art freezing, cooking, and larking about facilities. It is strictly take-out, and offered no dining accommodations. The menu features family favorites such as glowing mackeral tongues, beer-battered hammerhead shark, and a charming mixture of endangered oysters and lead shot entitled “The Lieutenant’s Heartbeat.” The defining feature of Codpiece’s titular restaurant is a dish made by dumping 101 live sharks into a tank, and forcing them to fight until only one remains. The patron is then invited to eat the shark who killed a hundred other sharks. It is rumored that there exists a secret menu with a 1001-shark “eat a winner” dish, although nobody powerful enough to order such a thing has come forward to be interviewed.

Below Codpiece’s restaurant lies a satellite branch of renowned Stalinist nightclub Feis Kontrol, promising untold opulence for the select few patrons allowed in. After the fall of the USSR, the Feis Kontrol in Codpiece Feeshbus became the primary location, and attained independent fame as the home of Borislav’s Bathtub Wodkas VLLC., including Borislav’s Cubic Label, Borislav’s Theoretical Label, and the vaunted Borislav’s No Label, renowned for its ability to force a party situation in any terrain, not to mention its unparalleled ability to remove parasitic marine life from the hulls of cargo ships. Feis Kontrol was and remains notoriously selective, requiring potential patrons to demonstrate their peerless attractiveness, shocking wealth, and superhuman mental powers. It is rumored that Former Japanese Prime Minister’s Voss Nose Motoring Concern was founded to build tanks to destroy Codpiece Feeshbus after Hata was turned away by Feis Kontrol perimeter security forces, although Hata forgot about that goal and decided to start the Crimean War instead.

Lastly, the Feeshbus is topped by the office of Lawbear & Partners, one of the world’s pioneers in pastrami rights cases. The proprietor (also the owner of SAAB) and his cronies rented the space from the mysterious owner of the Feeshbus in 1981, after their success in Roginald v. Admiralty Processed Meats; Lawbear & Partners now receive five cents for every pastrami sandwich sold world-wide, and they use their remarkable wealth to ensure the availability of deli meats to all who crave them, regardless of race, status, or height.

Codpiece Feeshbus can generally be found on Saumarez Processional Boulevard, between Guadalarama St. and 44th, or across from the Terrordome during foot-to-ball season. This reviewer ranks their seafood highly, as his family is being held in the Feeshbus’ reactor core until this favorable review goes to print. 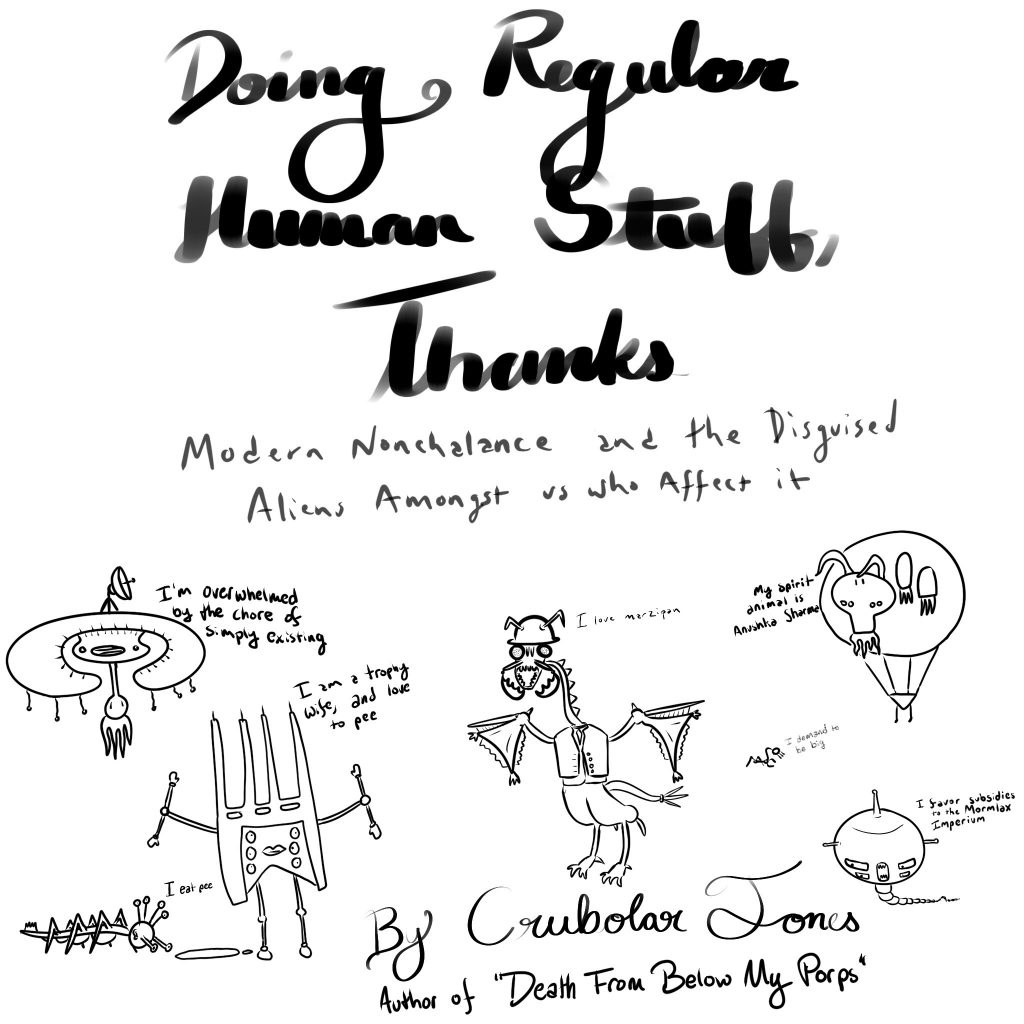 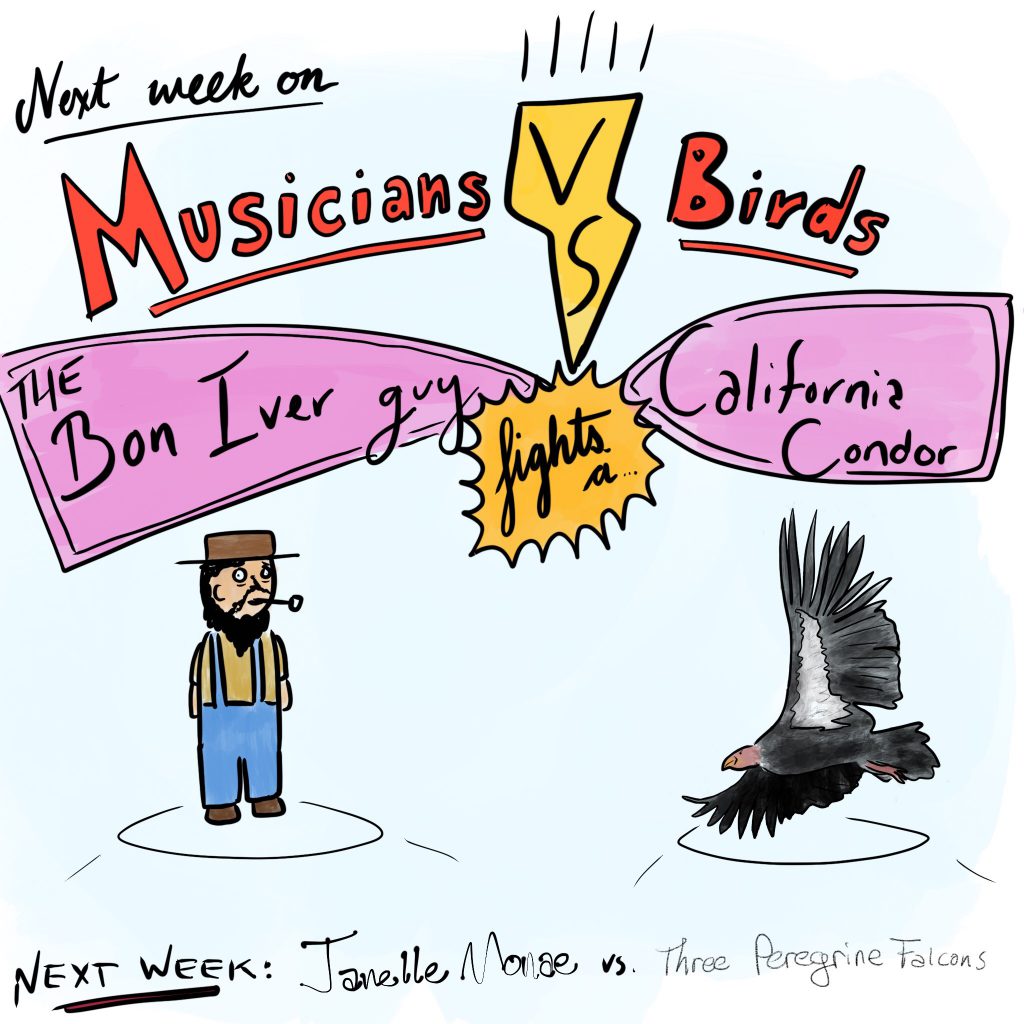 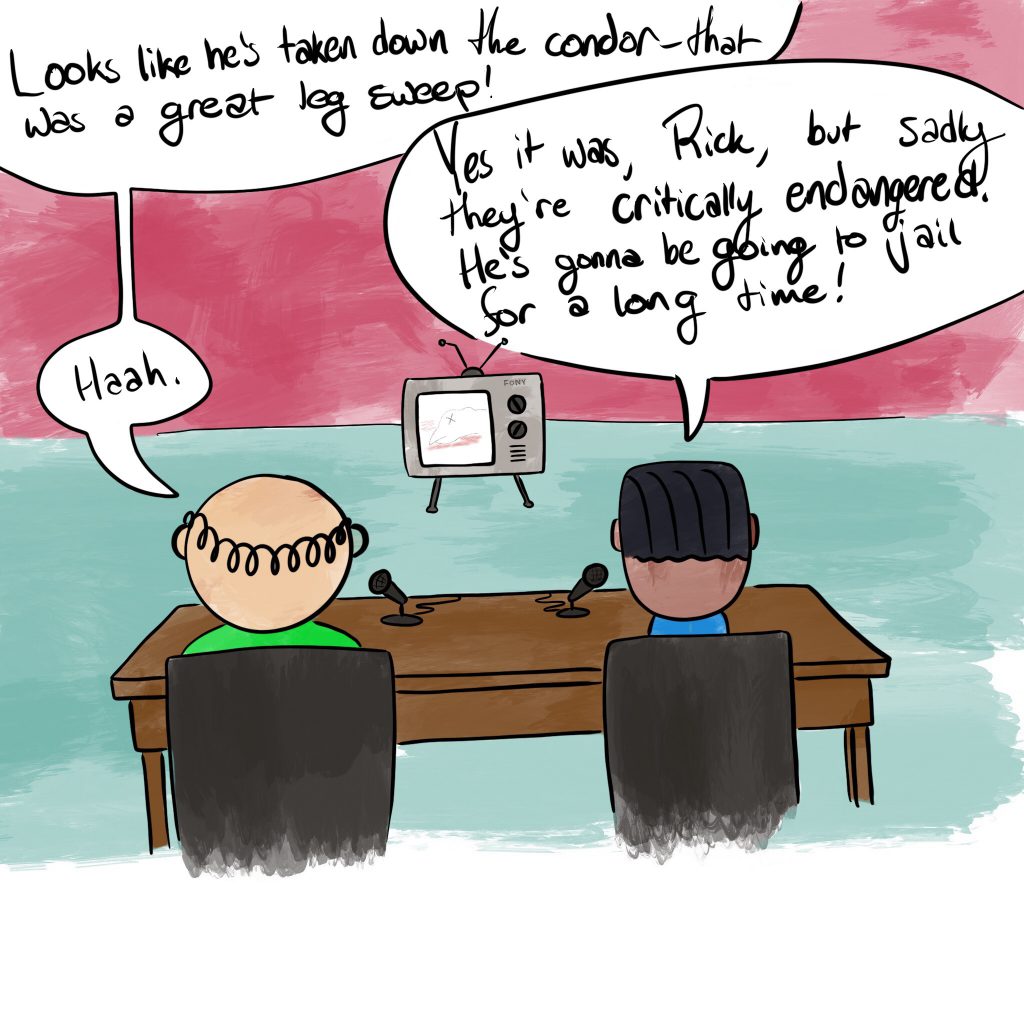 Fun fact, the REAL Ani DiFranco was murdered by a heron live on CBS in 2009.

Does whatever a human guy can

Take care of his teeth, brush and floss, 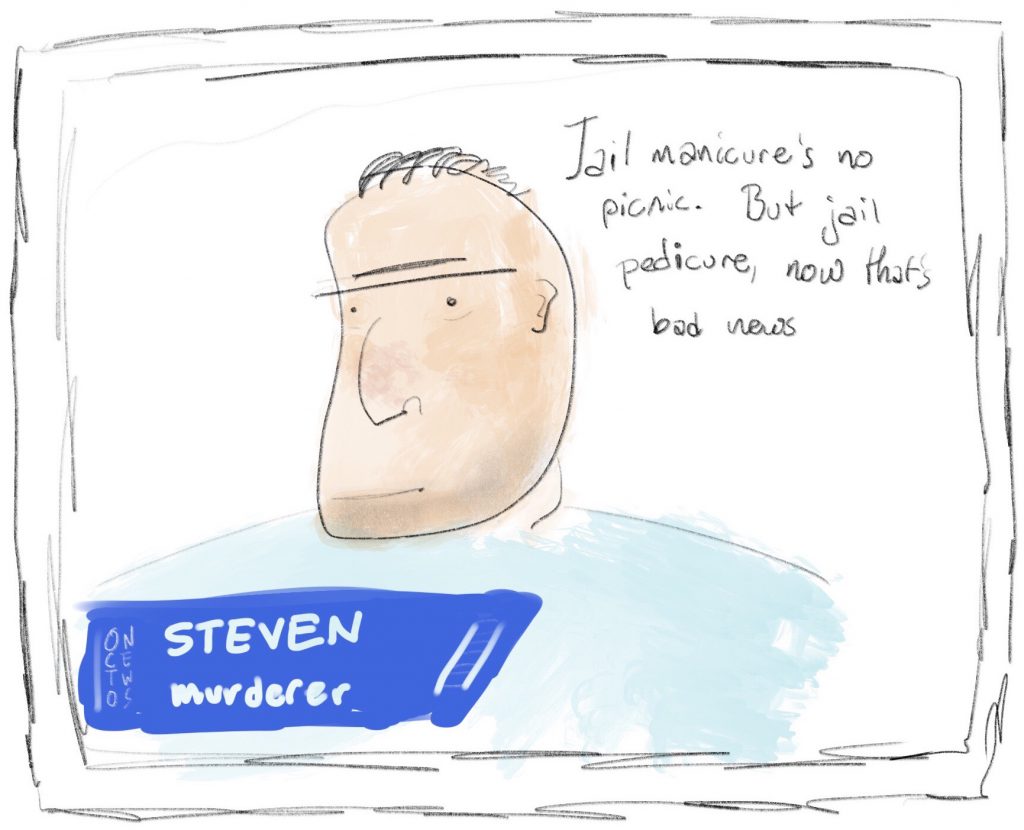 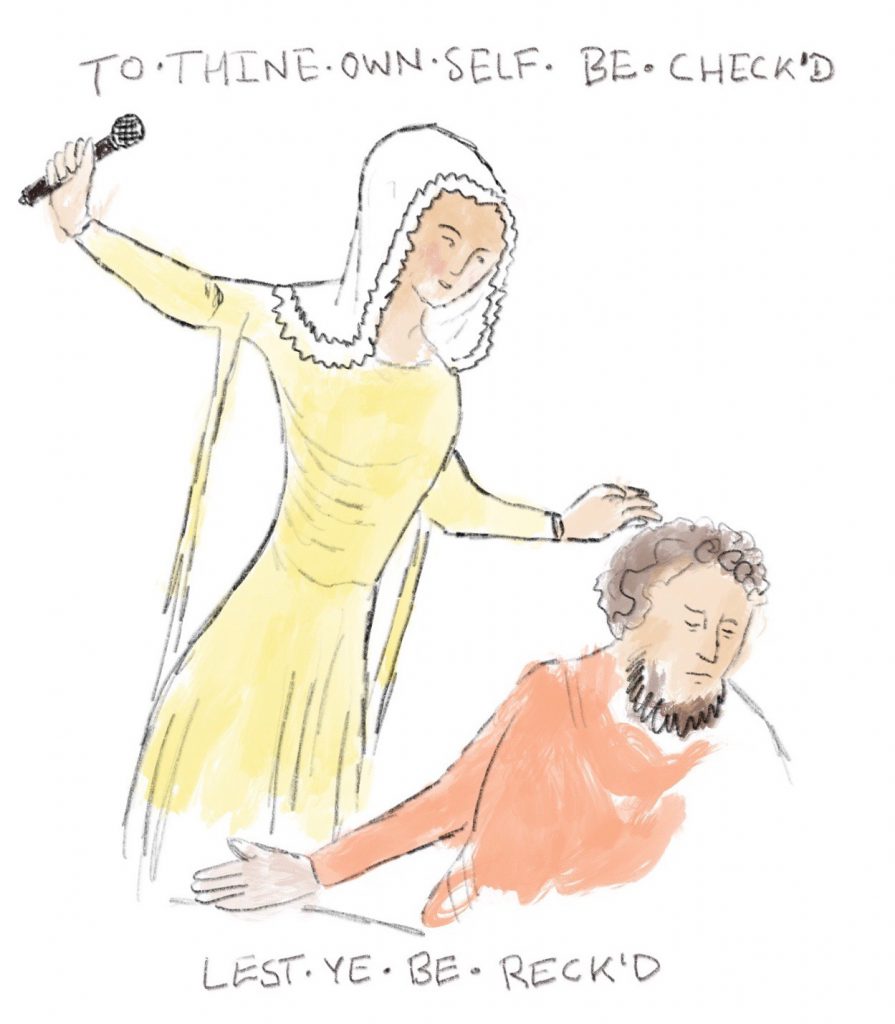