In this entry from a few years ago, I wrote about putting an SSD in an iBook from 2001. I got another iBook because I like them and they play Starcraft and if I didn’t who would, and I thought that it’d be fun to revisit that and see what a new IDE SSD did against that one from 2011.

Unfortunately, that was a short-lived plan. KingSpec (and others) do still make IDE SSDs, but almost all of them use the SM2236 controller, instead of the older SM2231, which seems to demand a couple more channels than the iBook knows what to do with. It can’t start up from a preformatted SM2236 drive, and it can’t install from a CD onto the drive either. Since clamshell iBooks are one of the trickier computers to do a drive swap on, I found this realization very amusing (although, truth be told, it’s not a terrible job at about 40-50 minutes; it’s just a fuss).

So that was out. But then I figured, in that last article I made reference to my CompactFlash-bedrivulated iBook — what if I revisited that? I made that thing in 2008 or so, surely CF has gotten faster. I also sold it in 2011 without having benchmarked it, lending an air of pointlessness to this whole thing, which was perfect.

So, I got a neat Syba IDE-CF bridge in 2.5″ drive format. Pretty nice; it has two CF slots. I used a Lexar 16 GB 800x card, since I had a spare one; presumably a 64 GB 1066x card would be faster. I also added a 512 MB stick of RAM and a new “CWK” battery to the iBook — which must be made using decade-old NewerTech tooling or something, but it works shockingly well. 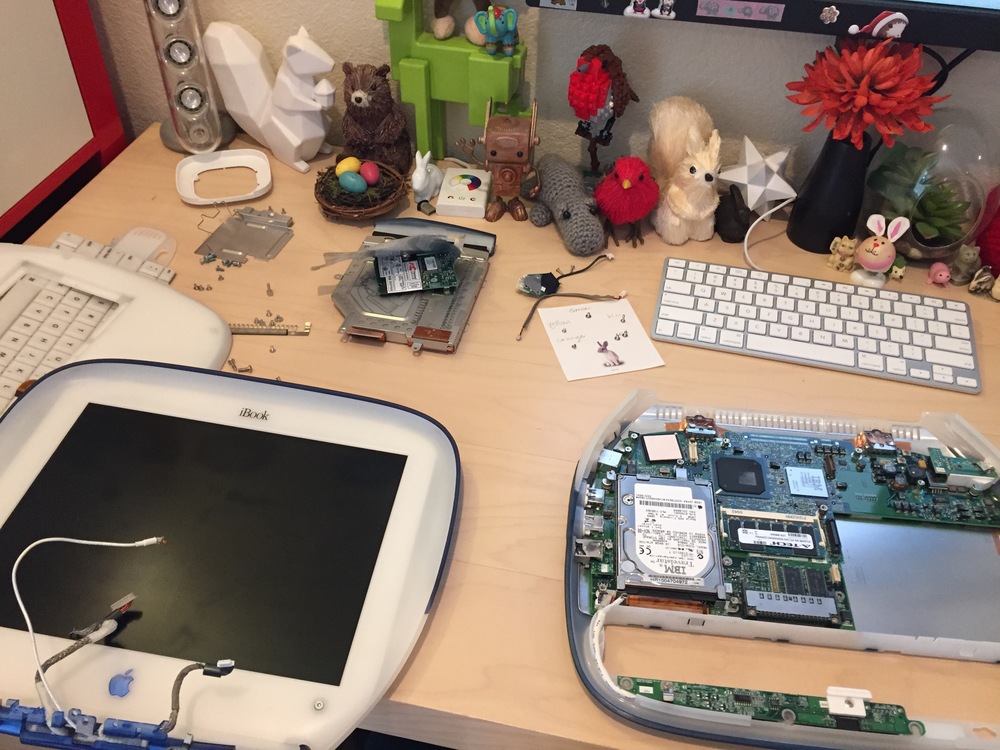 Installation was the usual pain in the ass. 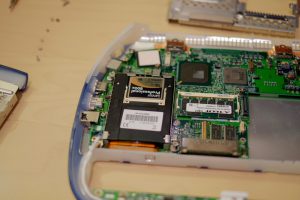 I also lost my Air’s disc burner and had to resort to, err, backup measures. I didn’t realize this iMac only had 10.1 on it, but it burned the Panther CDs fine, so that’s alright. 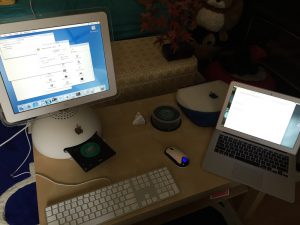 Anyway, long story short, it works great. On the left, here is the SM2231 KingSpec SSD in the other iBook. On the right, that iBook’s original Travelstar HDD.

A nice improvement! Slower small random writes than the KingSpec, but everything else is a decent little bit faster. Again, I think you could address that by going with a faster CF card if you were so inclined. The CF and CF-IDE bridge is also slightly cheaper than the 16 GB KingSpec was (in 2011) and the 16 GB KingSpec (with SM2236 controller) is now. The computer is fast for a 2000 laptop, silent, and gets pretty good battery life even by modern standards. The only downside is that the first-generation AirPort cannot use WPA2.

Obviously it’s sort of pointless. When I was little, the three computers I really wanted in 2000 were the Indigo/Key Lime iBook and the Cube, as well as the “Lamp” G4 iMac when it first came out in 2001. I couldn’t afford any of them at the time (although I eventually did have a 1.25 GHz 20″ iMac G4, bought slightly used in 2004, which lasted me until the Intel switch), and made do with a PM7100/80 upgraded to G3. But I guess buying now-useless things you couldn’t afford when you were small is part of being a grown-up or whatever. I have the iMac and a couple iBooks, and I had a Cube upgraded to a 1.33 G4 in 2007-2008, but sold it. That was real dumb since Cubes cost insane monies now. Ah, well. The point is, I don’t really use any of them and it’s pointless. But if you like pointless old nonsense, I guess I recommend shoving CF cards all up ins it. Sometimes you just gots to have a Starcraft 1 LAN party.