I understand why old people smoke—like, it makes sense if you were in a C-47 over the Netherlands and then your buddy Stu handed you a Lucky Strike and then jumped out and got blown to smithereens by flak, and then you wrote to your best gal and said “I’m gonna give Mr. Hitler a knuckle sandwich courtesy of ol’ Stu”, and now you smoke. That makes sense. But I don’t get why people my age smoke, especially since I grew up in late ’90s-early ’00s Palo Alto so with my friends that smoked it was like, hey, you can’t use smoking to help you look cool while angsting or rebelling. You gots nothing to angst about. We’re all rich as thieves. I’m low class by Palo Alto standards since my mom was a librarian, but I can go literally anywhere else in the country and they will just give me a motorcycle. Our Aibos are made out of fucking platinum, lady, platinum. Why would you smoke.

Anyway, I’m guessing that’s a huge problem for tobacco companies. It seems like they’re taking all their US marketing money and dedicating it overseas to make Gujaratis and Polynesians chew tobacco like some goddamn relief pitcher, and US legislation isn’t moving fast enough to allow Marlboro to make good money in the ol’ Humboldt Honeydew… the ol’ Tijuana Postholers… the ol’ British Columbia Her Majesty’s Own Marijuanulated Smokeable Goods. No, they need a new idea. One that combines a healthy aspect that’ll appeal to the young people with the “This is America and fuck you” spirit of their moneymaker. And I have it! 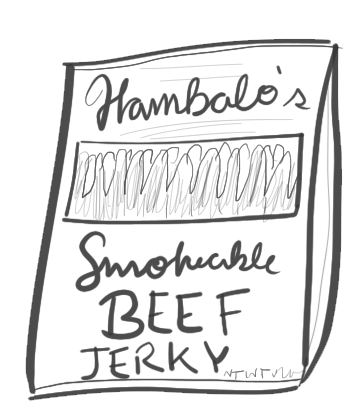 THAT IS CORRECT. Beef jerky that you can tear into strips, light, and smoke. Or you can eat it. But if you smoke it, it’s like a cigarette except it makes beefy smoke, then you can eat it. This is up there with my Kinect cable car game when it comes to good ideas, because there is no downside.

It comes in perforated chunks, so it’s easy to deal with. There could even be an extra-chunky “cigar” version for cigar aficionados who want to stop smelling like assholes. It could not be more simple. Cut, light, smoke, eat: Hambalo’s Smokeable Beef Jerky.