I will tell you one story of modern invention, with uncommon accuracy befitting a recounting of a tale of a member of Her Majestie’s court. 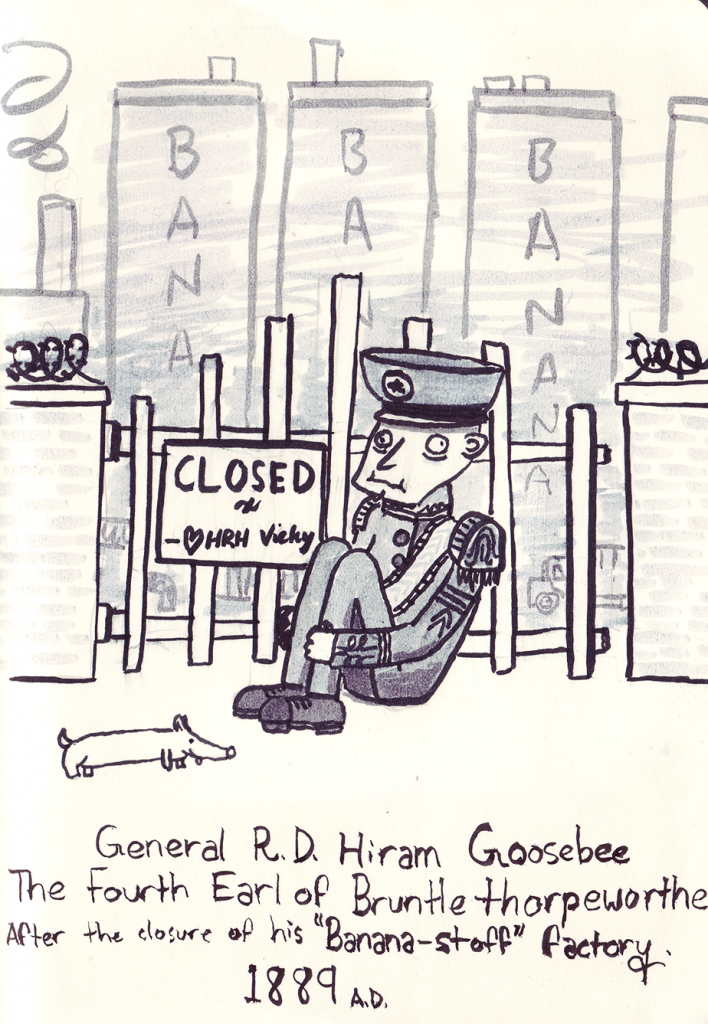 In 1884, A Most Notable Veteran and Hero of the Crimea named R. D. Hiram Goosebee, Fourth Earl of Bruntlethorpeworthe, had chanced upon a scientist reputed to be 400 years old, who promised that — with proper funding — he could wean the Kingdom from its hideous consumption of various irreplaceable fuels; 400 whales, 600 sea-cows, and krill beyond number had to be killed each day, or else lights would go off from Huntingdon to Occupied Columbia.

This science man, in the fullest spirit of the time’s environmentalismé, proposed a new fuel to end these multifarious slaughters. It would be made from a series of rare plants and shredded tree bark, and became known as Banana-Stoff.

R. D. Hiram Goosebee was an immediate believer in the ideas of the science man, and gave him £20,000 to further develop and introduce the Banana-Stoff Age to the Amalgamated Territories. A factory was built and staffed with skilled mud-workers, and concoction of Banana-Stoff began immediately. Devices using B-Stoff were released, including the first lamp, the first escalator, and the first motor carriage — the Voss Nose Dihydraphone-88. All of these were immediate hits with the Monied Public, and R. D. Hiram Goosebee was celebrated in the streets.

Despite the success of Banana-Stoff, problems began to come to light. The science man that Goosebee had funded began to record instances Banana-Stoff implosions, and realized that the fuel was inherently unstable, particularly when exposed to bipeds. Most fatal was our very own Queen Victoria’s realization that Banana-Stoff bark-stripping was decimating the nation’s tree reserves, which she needed to make armoires and golems. She ordered an immediate halt at the Banana-Stoff refinery on the Isle of Dogs, and, overnight, the nation was forced to revert to blubber-oil and octopus beaks to light their homes and power their Voss Noses.

Goosebee was distraught, resigned his earlcy, and took the last Banana-Stoff powered ship to the Overseas Americas. His slender dog, Knuckes, remained in the UK and wrote a tell-all 3DO game. No amount of signed 8×10″ glossy portraits of Queen Victoria convinced him to return home; his ancestors remain overseas, and the Banana-Stoff refinery still sits merely a mile south of Her Majestie’s Obelisk — a towering, irradiated memory to R. D. Hiram Goosebee’s dream of a blubberless future.