The only things you need are the W3680, some Arctic Silver thermal compound and thermal compound remover (Amazon or NewEgg has the ArctiClean kit that comes with remover and “purifier”), a long 3mm Allen key, and the Mac Pro Firmware Upgrade Utility (you have to register to download).

The first thing to do is to use the firmware upgrade utility to make your Mac Pro think it’s a 2010. That’s one click. It’ll still identify itself as a 2009 in the System Information panel, but I believe that pulls its information from the serial number; the computer itself behaves as a 2010, and you’re clear to install the newer processor with B1 stepping. It’s worth pointing out that the W3680 is the same chip used in the 2010+ Mac Pro, as is the firmware, so this is all OEM — no weirdness.

Once the software is done, it’s just like swapping the processor on any other computer.  Actually, it’s easier, since the processor lives on a daughterboard. Pull that out: 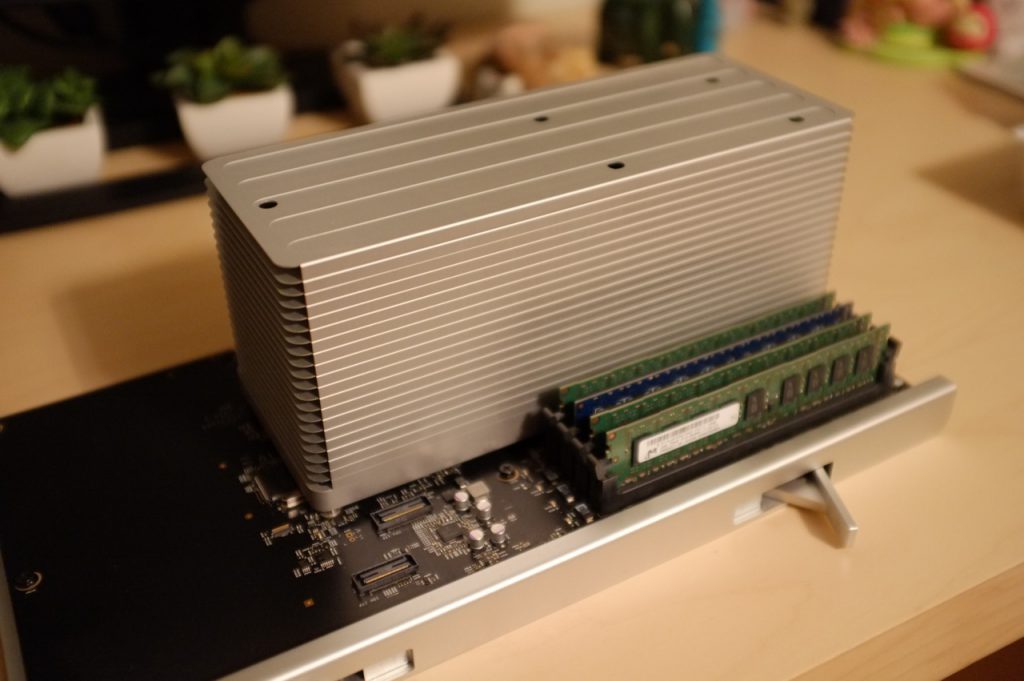 Use the long Allen key to remove the heat sink. It’s also a great time to blow all the dust out of it. When that’s done, you can pull it off and get this: 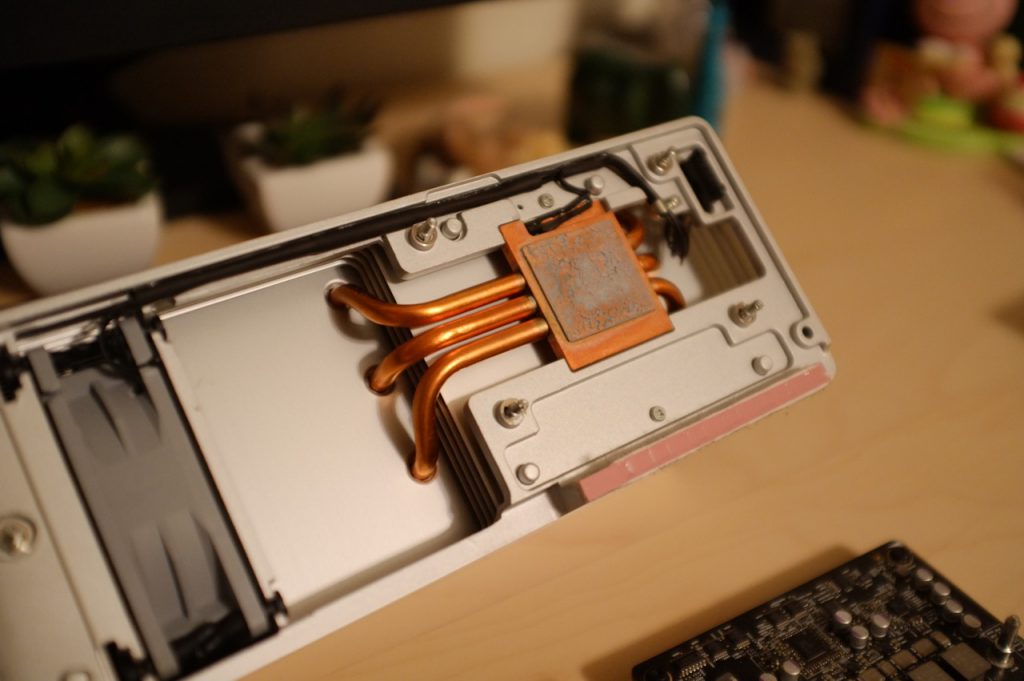 Note that the standard application of thermal compound is actually pretty bad. At least, it was bad on mine. The processor side will be like so: 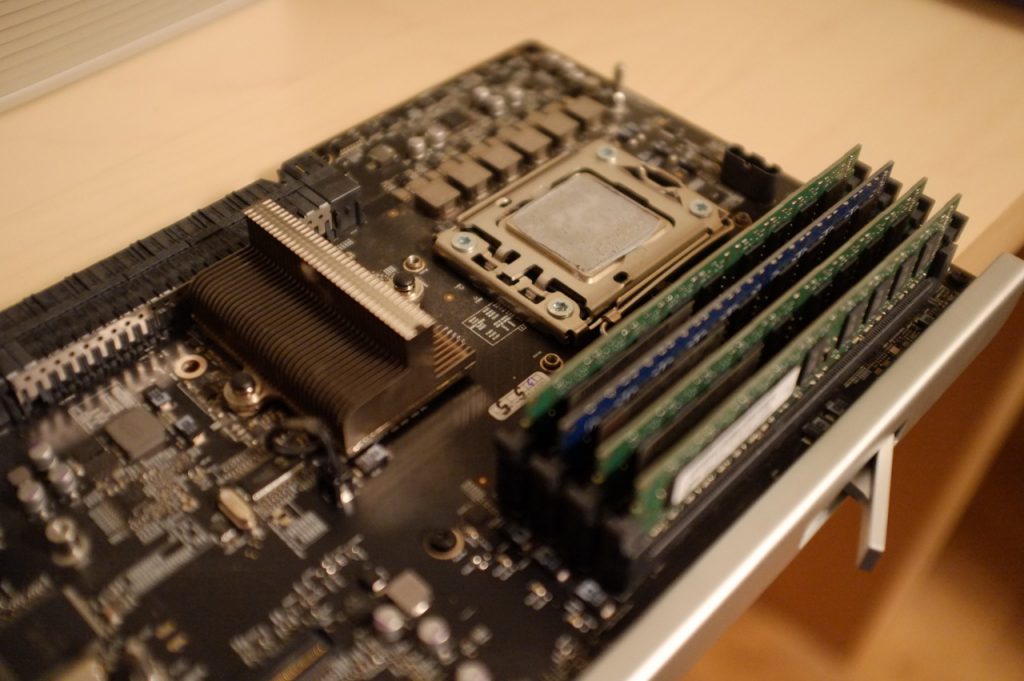 Again, not great; there’s bubbles in the compound, and goop falling off the side of the heat spreader. Use the thermal compound remover (ArctiClean in my case) to get this crap off the heat sink and processor, and the surface purifier (where applicable — that’s the “ArctiClean 2”) on the heat sink. Then, you can undo the latch and carefully take the processor out, being careful not to touch the contacts on the processor or the daughterboard. The new processor drops straight in, like so; make sure to get the alignment right: 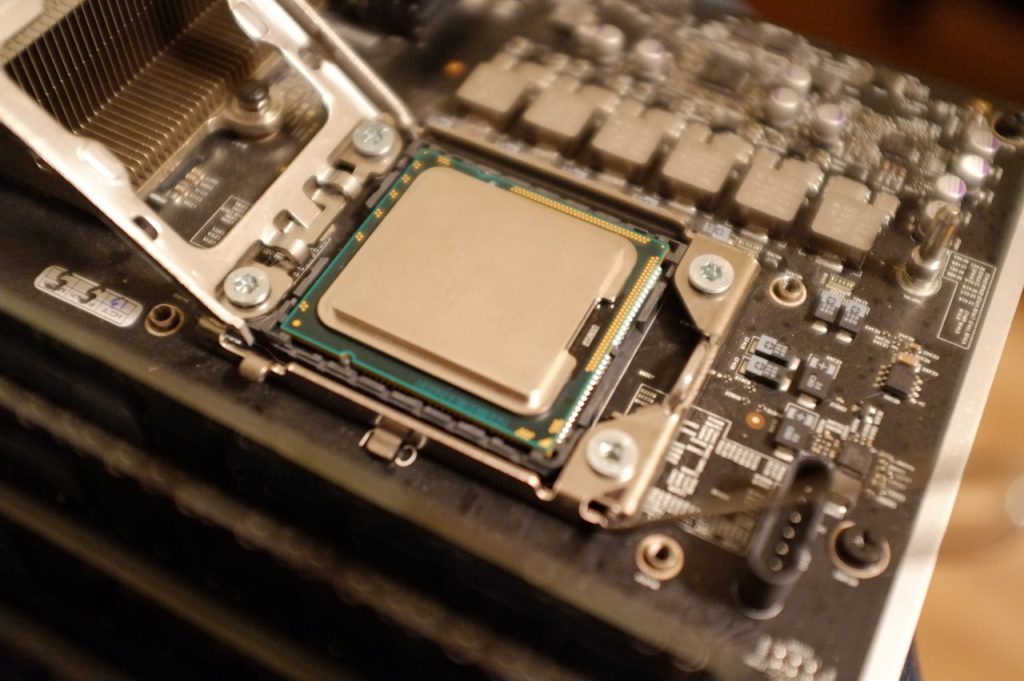 And latch it up.
Then, after you’ve made sure the surface is clean, it’s time for new thermal poop. On these Xeons, Intel recommends that you don’t cover the whole thing in thermal paste. Instead, taking the alignment arrow to be pointing south-west, do a bead running north-south (this one’s thinner than it looks; you don’t wanna cake it on there): 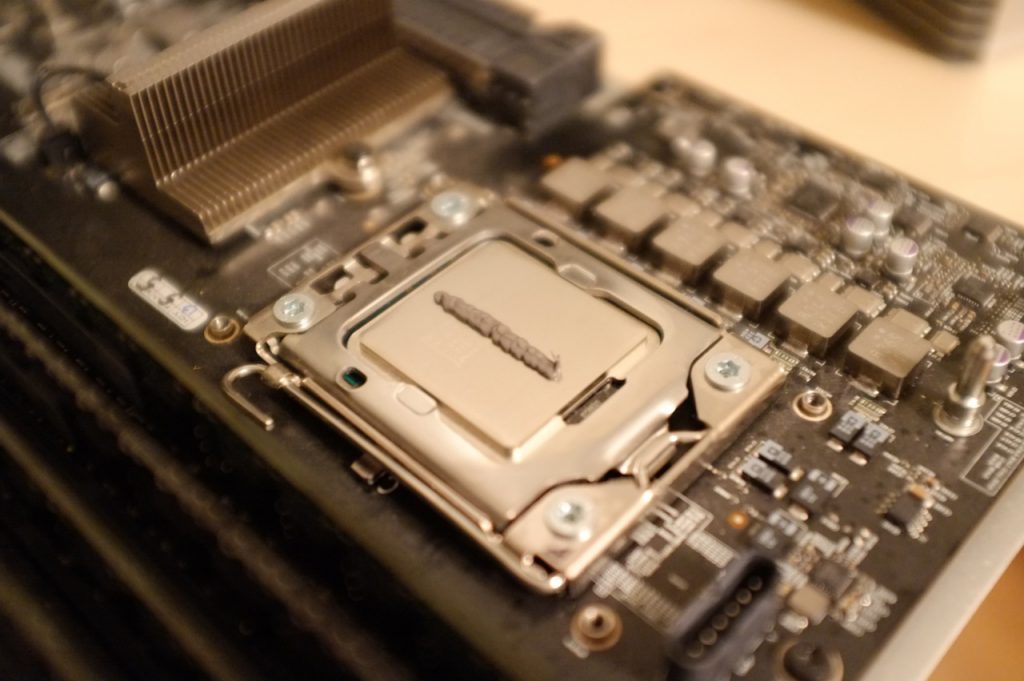 Once that’s done, you can bolt the heat sink back on. Put it over the alignment pins to get it on straight, and then screw it down evenly. You’ll have to push down a bit on the Allen key to get it to engage. They will have a firm stop once they’re tight; obviously, you don’t wanna exceed that.
Pow! Put the processor tray back in and go! 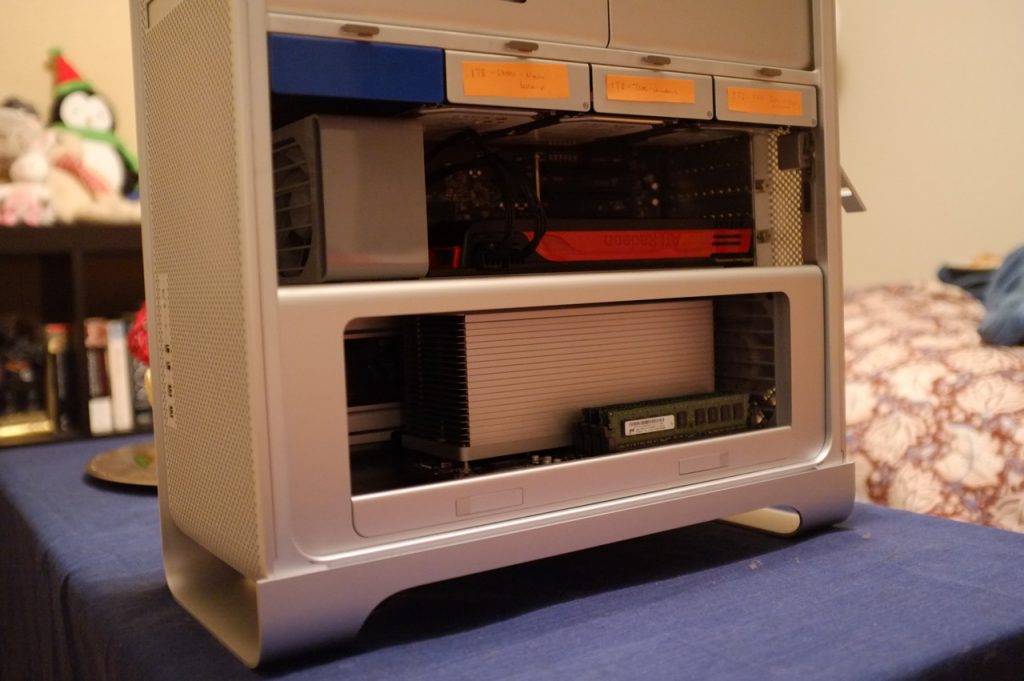 It’s faster than the 3520 to a fairly nutty degree. My system already has a SSD and 5870, so it was already pretty speedy as far as Macs go, but the W3680 was like getting a new computer all over again. As a side note, you can now use 1333MHz RAM. You don’t have to, though, as the W3680 is fine with 1066 (I’ve got four sticks of mis-matched 1066 in here; I ordered 16GB of 1333, but it hasn’t come yet and I was eager to try the new processor).
As a side-bonus, the stock thermal compound was so junky that my system actually runs 10°F cooler at the CPU now.
Here are benchmarks.
Before:

Before on the left, after on the right. Full results are linked. These are 32-bit scores; 64 seem to be about 1000 higher for each.

I didn’t do any serious testing with games, but improvements (at 2560×1440/full details) seem to be anywhere from 0 to 30 FPS, depending on the game, with X-Plane being the high end. Most are around 10 FPS faster. The big improvements are in multithreaded apps, of course, since games don’t really use those two extra cores.
A ton faster and a bit cooler. Neat!