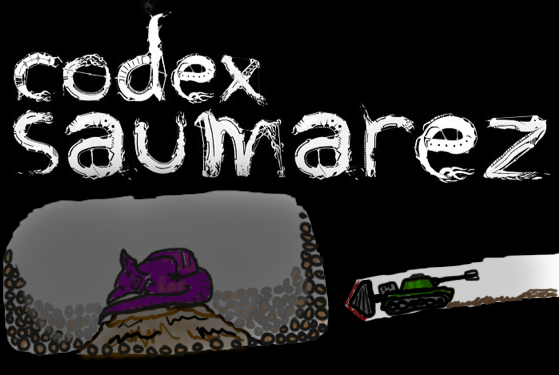 I will tell you one story of El Generalissimo Ernesto R. “Mad Dog” Saumarez, Uniter of the Americas and Guardian of the Red Shield.

In his youth, El Heneral Saumarez lived, for a time, in Sanyo Presents Rocas de Santo Domingo. This small village in the heart of the Southern Americas was well-regarded for its cuisine and the pleasant, husky voices of all its residents, particularly the infants. . . but it was also a cursed hamlet. For underneath the town, in the depths of the Lithium Mines, there was trouble—in their hunger for lithium, the Chileans dug too greedily, and too deep. You know what they awoke in the darkness underneath the Cordillera de Mahuidanchi, for it is common knowledge now. At the time, though, not even Saumarez knew. But once a week, in the darkest part of the Sea-Goose Week, a million giant bats would shoot out of elevator shafts across the tiny village, chew off the nipples of anyone they could find, take a quick break, and then die.

El Heneral Saumarez, Protector of the United Seas, was not a fan of the Underdark Bats and their nipple-hungry ways. He called upon his assistant, a young Wibbles Hugo, to help him outfit an Under-Ground Expedition, the aim of which would be to find the home of the bats and destroy it. Working late into the night, the team of man and Super-Man created an early prototype of the device which Wind-Tamer Saumarez would use to conquer The Salvadors twenty years later—the Mole-Tank! This contraption was a tank with the world’s largest drill bit on its backside; where tank barrel and machine guns and steel treads could not forge a path, the tank could merely drive in reverse, and burrow through matter organic or in-. A fantastic sort of device.

The pair clambered into the beastly vehicle, and El Heneral Saumarez set a course for the Lithium Mines. “Let us descend!” he said, and descend they did; several weeks of drilling passed slowly until suddenly, the Mole-Tank broke through into a giant cavern. As its sodium superlamps clicked on, Saumarez and Hugo could see more and more eggs—a million eggs, each filled with a fetal giant nipple-fevered bat! At the center, a slugulous mother bat lay, producing even more eggs as she sat. “Sir, so many of them! So, so many!” Hugo cried, “Not enough bullets! “I am Saumarez,” El Heneral Vanadioso replied. He opened the main gun’s loading hatch removed the armor-piercing rocket shell’s warhead, and put in its place a single hair, plucked from his own head. Re-chambering the round, he swung the main gun around and fired at the center of the mother bat. The shell lodged itself in her chitinous plating, and grew white-hot—and all of a sudden, a million Saumarez-hairs burst from the shell, each of them spearing one bat-egg! The last, original hair sprung out last, growing and wrapping itself around the neck of the mother bat.

Generalissimo Saumarez saw her writhe, and reversed the tank into her chest, the giant mole-blade spraying bat goo everywhere. “Sir, her death already comes. . . your hair is magical, let us not waste the mole-blade’s power,” Hugo said. “I am Saumarez,” replied Saumarez, as bat purée sloshed over the tank’s uncompromising body. The two returned to the surface, and the residents of Sanyo Presents Rocas de Santo Domingo immediately crowned Saumarez their king. “I was already your king,” said Saumarez, “but I will bless you all nevertheless, at a later date.”