Note: This is a JM Classique™ post. Photobucket are winguses and broke image links from ten years ago, removing the images from old forum posts. Since I’m going through each old post and re-hosting the image on this server, I figured I might as well shove the post here, too. JM Classique™: Your Trusted Brand of Yestercrap. 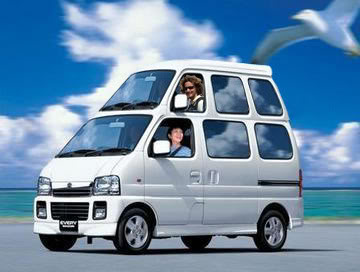 Ugly Babies Gazette – Ryugyong International Motoring Expo: Stanislaus Motoring unveiled the Roomadero 88, the world’s first cost-saving “hostel car,” in a special presentation earlier today. With two stories, a shared bathroom, and a “suspect” kitchen, the Roomadero 88 will utilize the cost-saving principle of the hostel to lower the entry cost for buyers, claims Stanislaus CEO Bob “Mad Dog” Ssssanchez. “It’s great,” said Ssssanchez, “We can leverage different cost-saving opportunities in each area the Roomadero 88 will be sold in. In most North American markets, the Roomadero will come equipped with German backpackers who can and will tell you what’s wrong with the US. Meanwhile, the Western European-market Roomadero will feature Americans who are just in the car to “Y’know, find themselves or whatever. Really get in touch with some stuff, I guess.” In both cases, we pass the savings on to the consumer. Sometimes the German won’t get out of your seat. It’s great.”

Industry insiders present at the event were less impressed. “I appreciate that getting a modern, comfortable car to market at a competitive price is incredibly important in these economic conditions,” wheezed Lambert “Mad Dog” Meertens of former automaker-turned-charnel house Chrysler, “But having a permanent unruly visitor in one’s car might be an unlivable proposition for consumers. While driving the CARB-spec press model today, my Japanese tenant kept asking me if the Golden Gate Bridge was nearby. I can’t see this catching on.”

Despite any possible issues, Stanislaus representatives say that they plan to launch the Roomadero 88 by the end of the year, citing a need to “move on” after the failure of the Stanislaus Newtly, the world’s first land-hydrofoil.