I commute by bike to work, and I was looking into a better way to carry my garbage back and forth. Better, even, than bungee-cording my bag to the back. My old bike had an old soda crate on it, which worked okay, but my more recent bike has a big-ass 8 lb. chain lock and is Dutch, so I was in search of a Dutchier way to carry things. The Fietsklik is one such thing, but I couldn’t really find any review of it, at least in English, although it was a Kickstarter about 18 months ago (most of the English-language Fietsklik things are coverage of the Kickstarter). So, this is that. For reference, my commute to work is 3.3 miles each way on a very bumpy dedicated bike path. Between the bumps and the fact that I do it whether it’s raining or 110 °F, I wanted something that was both well thought-out and tough.

The basic system is a base-thing that attaches over your bike rack. The base is smooth plastic, making the rack a nicer place for a passenger. On either side of the base are clips that a bag can attach to using a mechanism built into each bag (Fietsklik offer three styles of bag). Each bag can lock on or quick-release. There’s also a crate that slides and locks on to the top. Pretty simple. Topeak makes a bag-and-crate system, but it is less suave. I didn’t buy a Fietsklik for a long time because their US shipping was something like 100 Euros, and I was too lazy to ask my mom in Wales to forward one. It’s currently 25 Euros to ship everything, though, making the total for a base, box, and bag 120 Euros with their current sale. I didn’t measure my bike’s rack because it’s a Gazelle and if a Dutch bike accessory didn’t fit a Gazelle I figured I might as well just jump into a volcano, but their website has size guidelines. 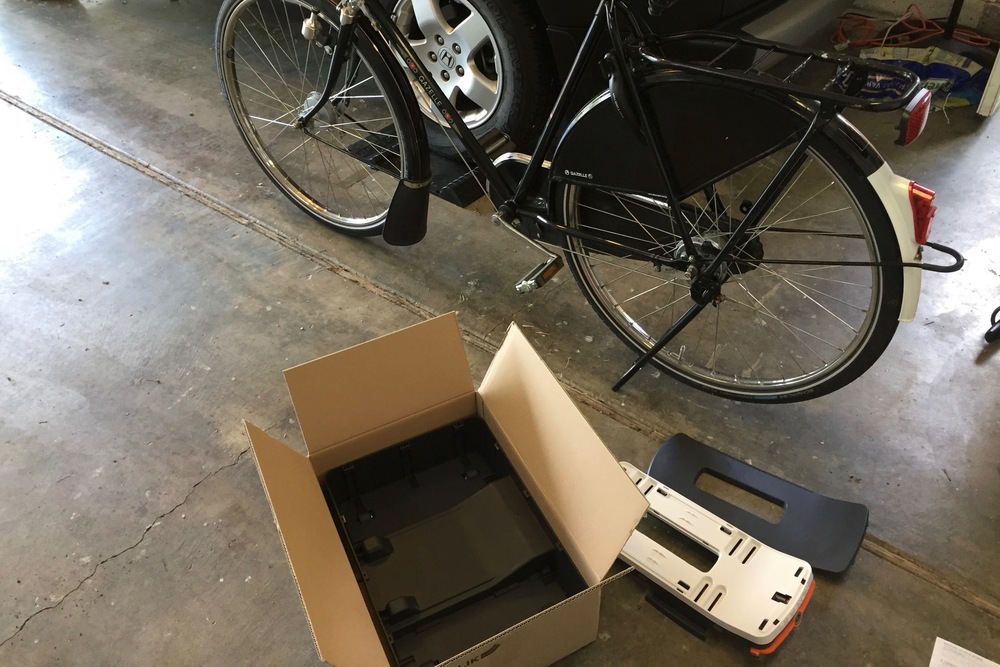 Here’s the base pre-installation.

Installation is very easy. It attaches with U-bolts, then you put a plastic cover over the business. You should get an 8mm nut driver, but everything else is included. The nuts are nyloc, but I figured a little Loctite couldn’t hurt. My crate needed a little assembly. The instructions were poorly-Xeroxed in the finest tradition, but they’re not really necessary.

In general the system works quite well. The bags are designed decently enough, as is the box and its locking mechanism. The box is a little flimsy during folding and unfolding, and I would prefer if its handle was “shopping basket” style, not “trolley” style. The handle is also a little flimsy when it’s unfolded. The box does, however, hold a lot, and feels pretty sturdy when it’s unfolded. Good for sandwich runs. The plastics on everything feel slightly brittle, but not too bad (we’ll see what Yolo County sun does to them over time) — on a scale where the Apple Pencil is a 10 and the box that grocery store pastries come in is 1, I would rate the Fietsklik stuff about a 7.

The big problem for me was the bag attachment mechanism. Here’s a picture of the business: 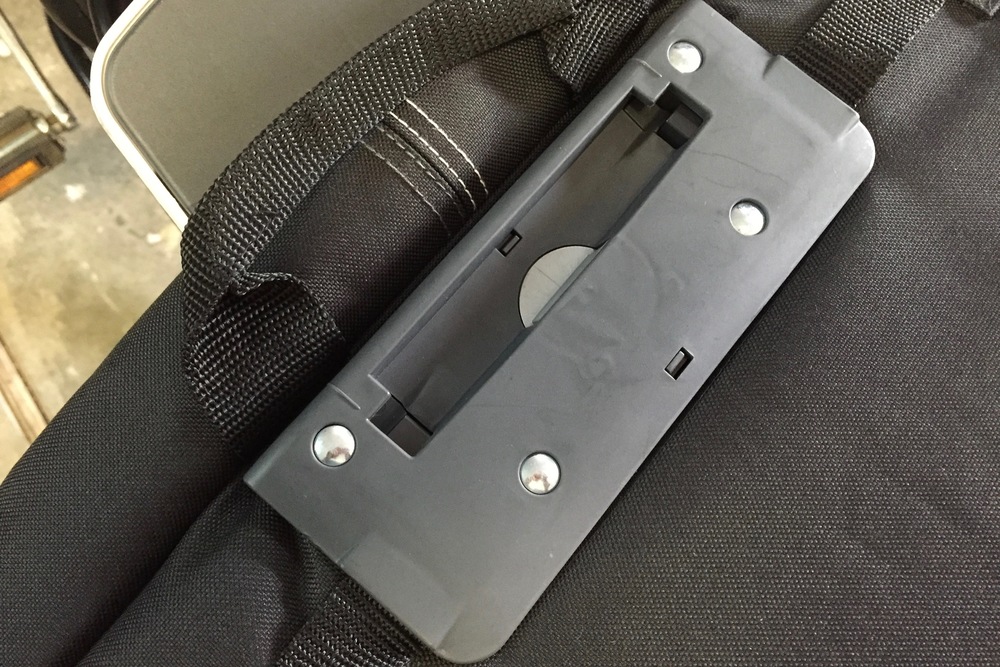 The straps to either side release the bag from the base. The locking mechanism is inside the bag.

The issue is those truss-head rivets. They’re pathetic. I put my big chain lock, a roll of pens, and a Nintendo 3DS in the bag, attached it to the bike, and two miles later the bag broke free from the attachment mechanism because the rivets fell apart. This was pretty annoying, as the bag itself is quite well-made. Fortunately, nothing was permanently damaged. My solution was to imbue the Fietsklik with some overkill. Here’s the inside of the bag half-way through the process: 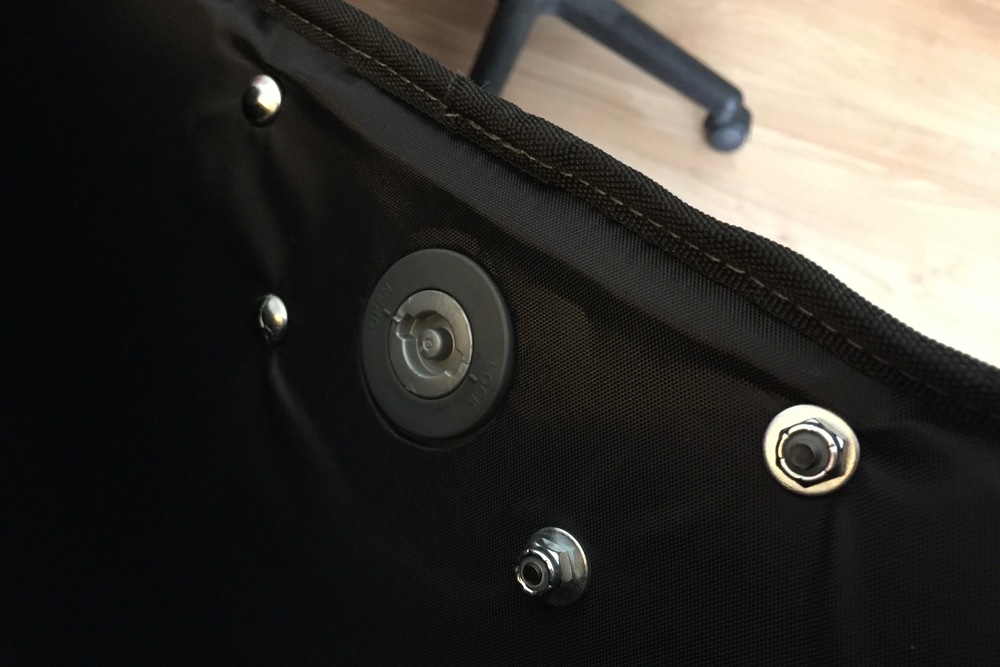 A dollar or so of hardware sorted everything out. I replaced all four rivets with bolts, washers, and nyloc nuts. Now my Fietsklik bag accepts no guff from interlopers.

That’s basically it. It’s a pretty well-designed system. It’d be nice if they sold the attachment mechanisms separately so you could hack together your own bags or whatever — I’d like to hang my chain lock right from the side, for example, rather than putting it in a bag. It’d also be nice to have the option for a slightly smaller, stronger (maybe non-folding) box that has a shopping basket-style handle.

The Fietsklik bits are all pretty good save for the issues above. I’d buy it again. 7 out of 10 Queen Beatrixes. 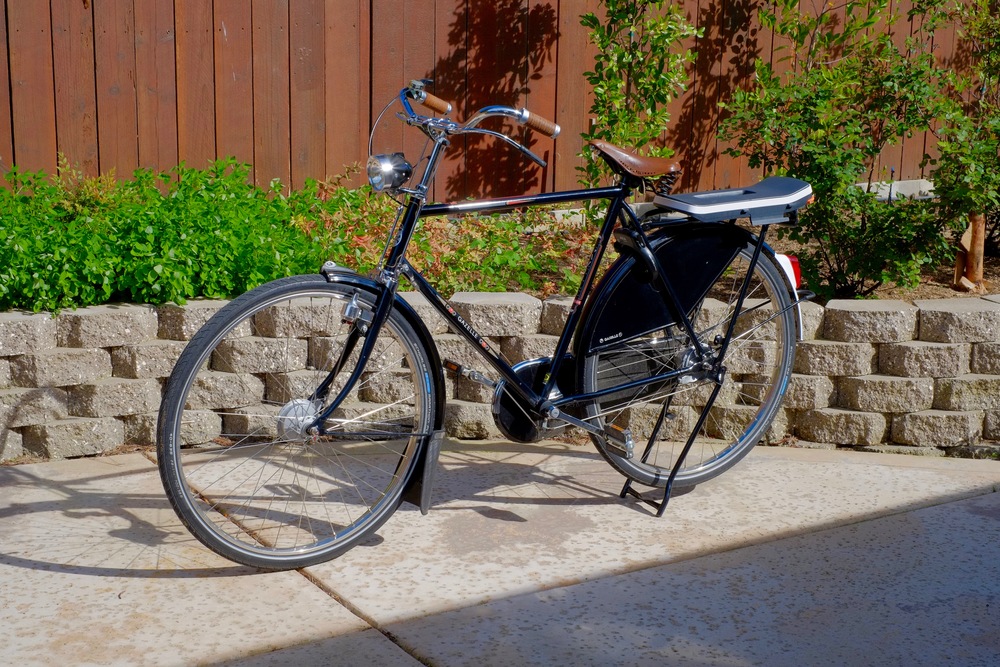 Update, a few months later: All the Fietsklik stuff is holding up pretty well. The only thing I’ve been noticing is that the plastic cover to the base bit scratches up really easily when exposed directly to my big chain lock. I have also been noticing that the bag is fucking huge, but I guess that’s alright.

Update, a year later (Feb. 2017): I stopped using the Urban Explorer bag because the retractable latches stopped retracting. I pulled the latching mechanism apart and it seems like the retaining clips inside are a bit vulnerable, as one had broken. The sliding portion of the latch falls out of place, and no longer works.

To replace it, I got the Urban Office bag. It’s a little smaller. My problem with the old bag was those pathetic truss-head rivets, but I thought that was maybe due to my huge chain lock. I now have an Abus Bordo folding lock that rides on the seat tube, so that cut a lot of weight from the bag. I thought it would be okay with the truss-head rivets — to work, I now carry a 12.9″ iPad Pro (1.5 lbs), a roll of fountain pens (almost nothing… 50 g?), and some headphones. Unfortunately, it lasted for about a week before the upper rivets pulled out and had to be replaced with more bolts, washers, and ny-loc nuts, as with the older bag.

I gave them a pass with the last bag since my old chain lock was massive, but the new bag has never even had a kilogram in it — for the latch mechanism to be falling off of the bag after a week of regular use is pathetic. Proper hardware is cheap (I paid less than 1 USD to sort the bag out, and I wasn’t even buying in bulk), and product failures due to improper hardware make for a bad look.