I got a new camera, and I thought I’d rant about it despite its inherent, ungodly oldnewsishness. 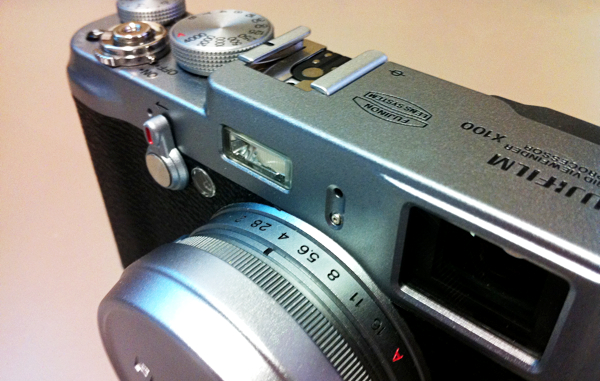 It’s a Fuji X100, which is pretty well-known to have splendid build quality, splendid controls, and a splendid sensor and lens which takes splendid pictures. It used to have maddening software, although now it doesn’t, and it didn’t have a zoom lens, which it still doesn’t, and the lens isn’t interchangeable, which it never will be, at least not on purpose. If you like wide, fast, awesome lenses on little cameras made out of metal, it is supreme.

Anyway, mine came broken. The aperture was sticky; you might turn the aperture ring to f/16, and the camera would slow the shutter way down, to expose for f/16, but your picture would be like staring into Buddha’s headlights because the aperture never actually closed past 2.0 or 2.8. Apparently this was the result of rushing back into production after last year’s earthquake/tsunami in The Japans. I’m pretty sure Fujis are made in Kanagawa or Odawara, well south of Tokyo, so I’m not sure how that would have affected just the aperture blades, but whatever. Tolerances or something, yo. So mine had this problem, and I figure the seller was just trying to offload it. Got it real cheap. It’s a $1200 camera, but I paid less than two-thirds of that. No damage at all, except the aperture issue and a couple tiny little scratches in the metal.

I called Fuji, and they were as classy as any bunch of New Jersey-dwellers that Rhodesia has ever seen. Mail it here, they said, and we will fix it, and then overnight it back to you. You need not a warranty card, my liege, they said, nor an original receipt, for we are classy. They even had a special X100 hotline. So they fixed it.

And goddamn, sirs! It is a fine thing. My first camera, when I was in middle school, was a Zeiss Contaflex, then I got the first Digital Rebel later. So I haven’t used a camera with proper controls in ages. There’s a ring for the aperture and a dial for the shutter. Both have values on them, as well as an “A”. If both are in “A” it’s in program-auto, if one or the other is it’s in shutter and aperture priority, and if neither are it’s in manual. After using Canons for years, and screwing around with the Av/Tv/M and the jog dial and wheel, and then the total incomprehensibility that was how Sony does it, the Fuji seems so, so reasonable. It’s like coming home to the Contaflex, and it makes using my old Canon feel remarkably stupid. There’s just no need for the inhuman mode thing and the dial, in a sensible world. The Fuji even has a jog dial that does nothing of use, just to rub it in. It barely even matters that the pictures are as spectacular as they are; it’s just impossibly more fun to use. Between the exposure control and the intriguing “heads-up display”-kinda OVF, it is three barrels of laffs, using the Imperial measure.

The only dumb thing is ISO. There’s a function button next to the shutter that you can set to change ISO, but auto-ISO isn’t in there. You have to go into the menus to turn that on. Then the function button is useless. It would be more sensible if the exposure compensation dial was ISO, and the jog dial that does nothing did exposure compensation. I usually leave it in auto-ISO with a set ceiling of 1600 anyway, but it’s just weird. It’s also a very slow focuser in low light-macro shots, but that’s usually ’cause I’m trying to focus on a black, fluffy cat who never stops leaping. Despite firmware updates, manual focus is usually too slow to be of much practical use.

Anyway, this thing is great, and Fuji is as classy as a palm tree wearing a top hat while it drives a Rolls-Royce Silver Wraith. My only regret is that I can’t go to somewhere cool like Alberta or Siam, because Davis is not very interesting, especially not in wide-angle.