I couldn’t find a detailed guide to this, so I made one just in case. 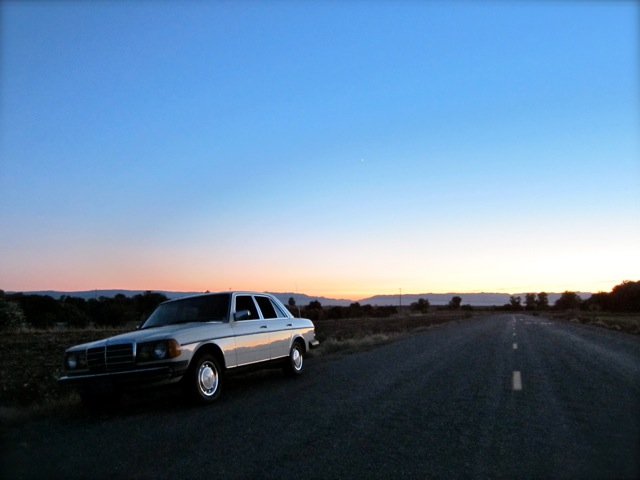 The W123 HVAC is pretty funny, because half of it relies on vacuum actuators and stuff (if your center vents don’t work, that’s why), and the other half relies on PCBs soldered at 90° to each other and then subjected to (usually) diesel vibration for 30 years. Failure of the latter can cause the HVAC not to come on, to come on sporadically, or to come on full-heat or -cool. So re-soldering is a good way to go. Let’s do that…

The first step is to pry the wood off. It’s held on by four pegs, and if you side a flathead driver behind it, it’ll just pop right off. Then you’re left with this. 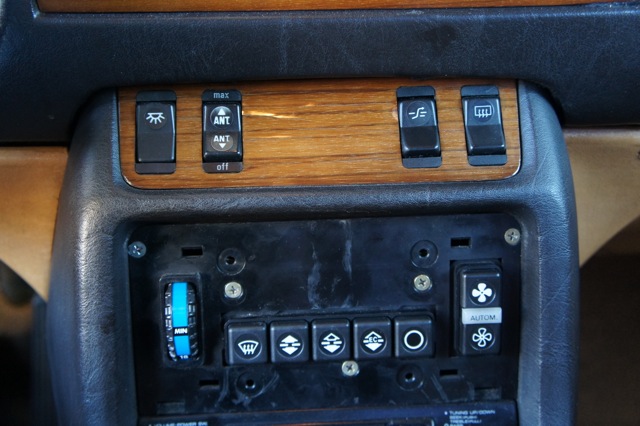 Removing the unit as a whole is pretty simple. One removes the upper-left and -right screws, puts a flathead driver into one of the flat apertures inboards from either now-vacant screwhole, and rotates the unit down, pivoting on tabs that sit above the radio. That gives one this. 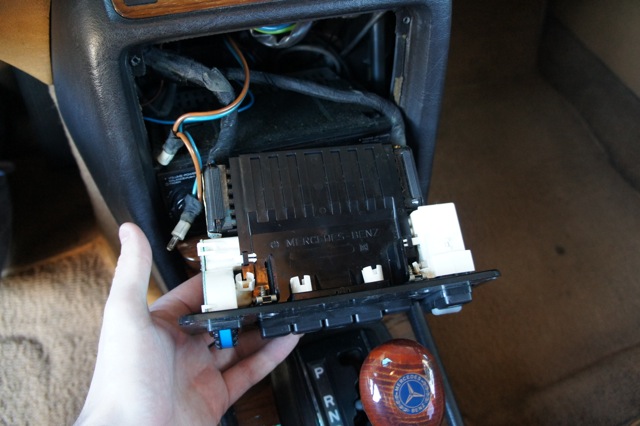 Wiggle the lights free (now is a great time to change them), and only two large connectors on either side remain. Removal is straight-forward. 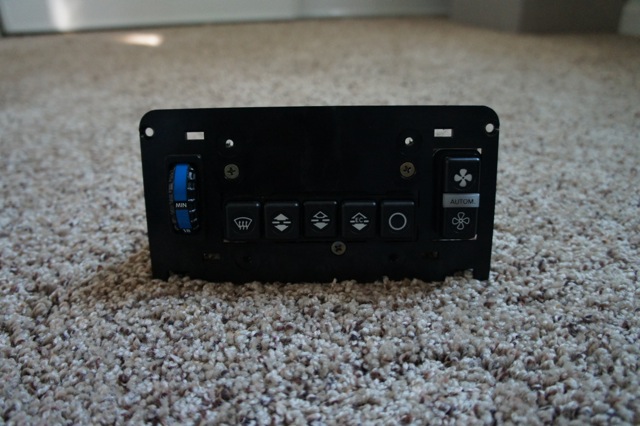 Once the thing is out, remove the faceplate by undoing the remaining three Philips-head screwdrivers. That leaves the unit itself. The next step is to remove the temperature wheel—pretty straight-forwards. Just compress the clip on the top with needle-nose pliers and pull the wheel module off. Careful with the clip. 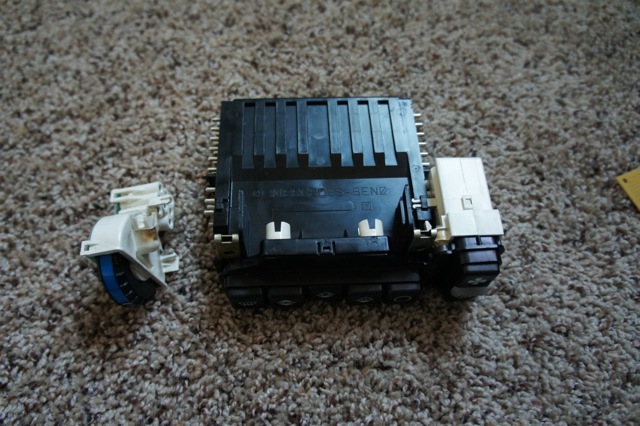 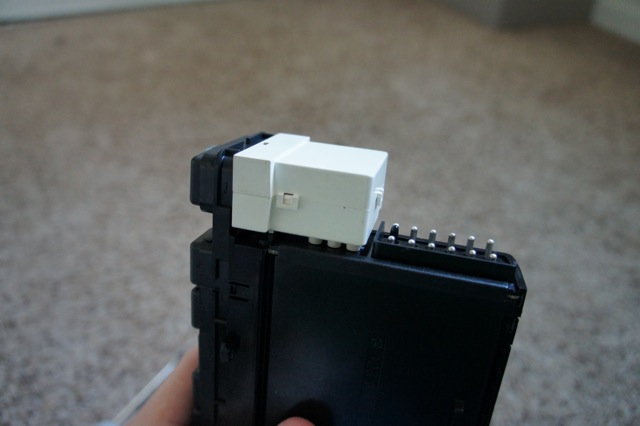 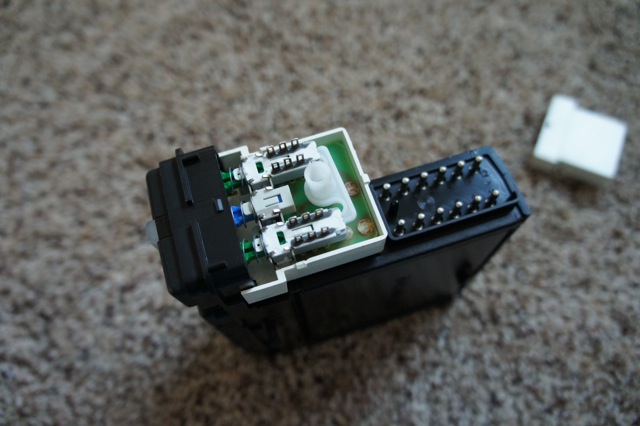 Pop. Next, we’ll take the cover off the fan-speed switch. This is pretty straight-forwards too. There’s three clips, one on each side. Take a flathead to them. Keep track of the little pivot inside the fan-speed box. It goes long side-up.

The next step is to remove the bezel around the buttons. One clip on the top, two on the bottom, and it pops free. But it won’t come off. Before that, one has to push the buttons out from behind the bezel, now that it’s loose. I find that inserting a big flathead wrapped with a layer of electrical tape, then rotating it 90°, works well. The “AUTOM.” button is a bit tough. But the buttons pop off, and then the bezel comes free. 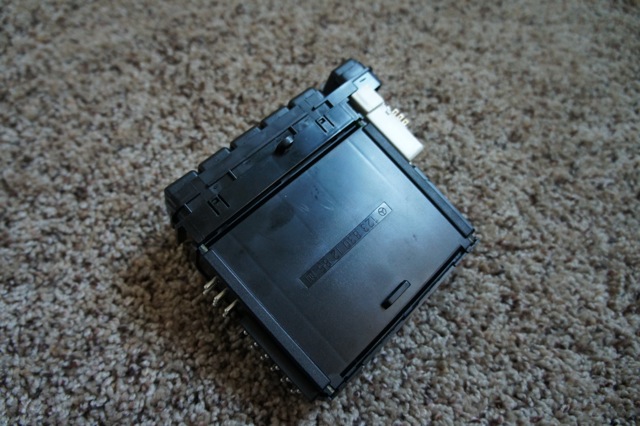 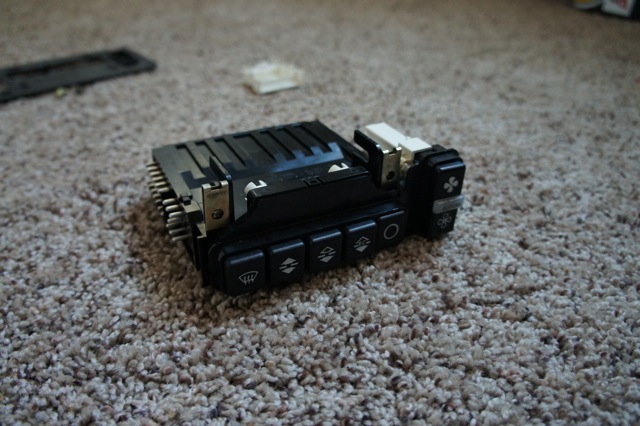 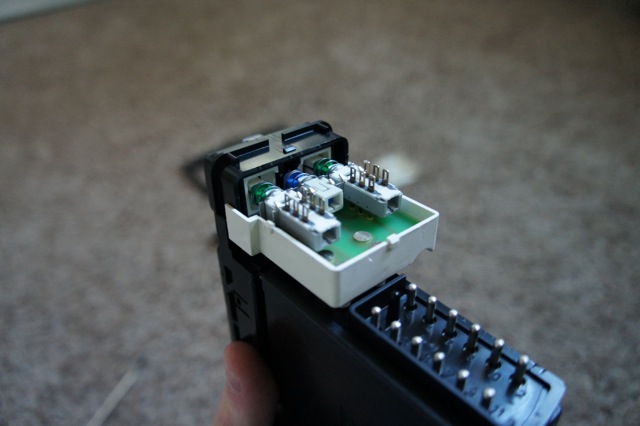 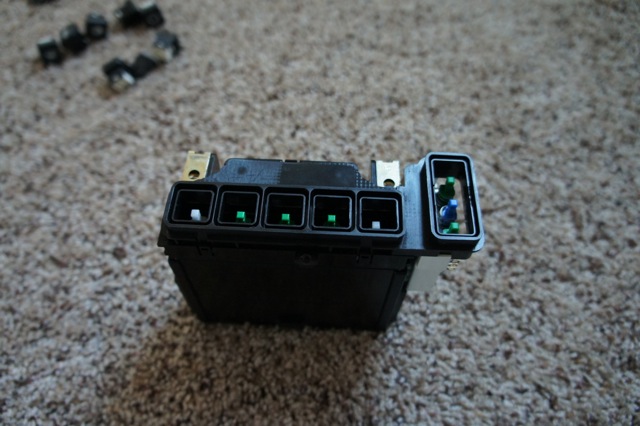 The next step is simple. Remove the light pipe. 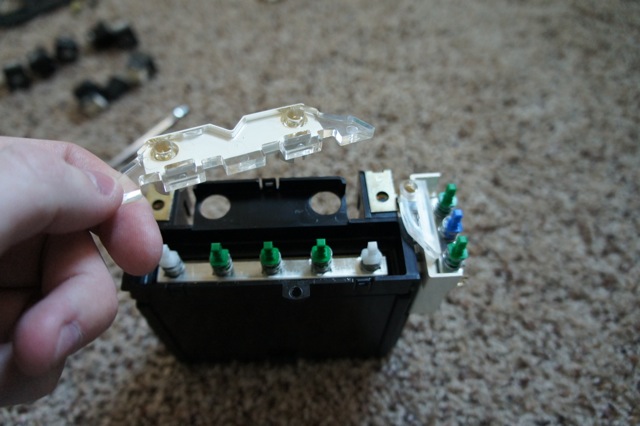 Now we’re getting somewhere. Next, we’ll look on the back of the unit, and find three big clips holding on the piece with the part number. Take the flathead to them, and then pivot the piece off. 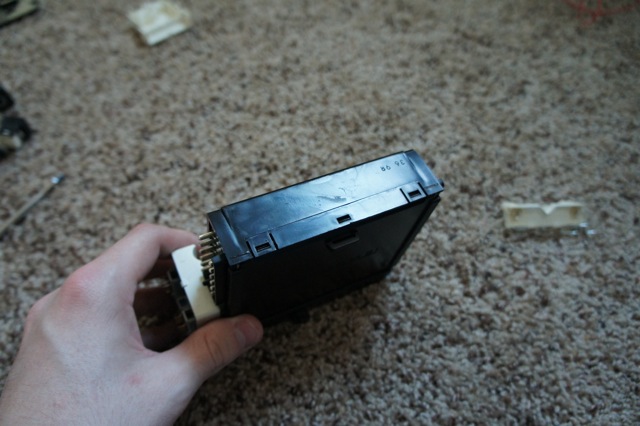 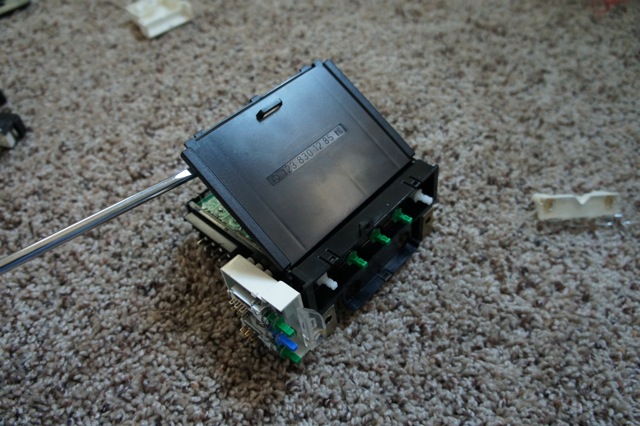 Now turn the unit over. Repeat the procedure to remove the temperature wheel to get the fan speed module off. Careful of the clip, once more. 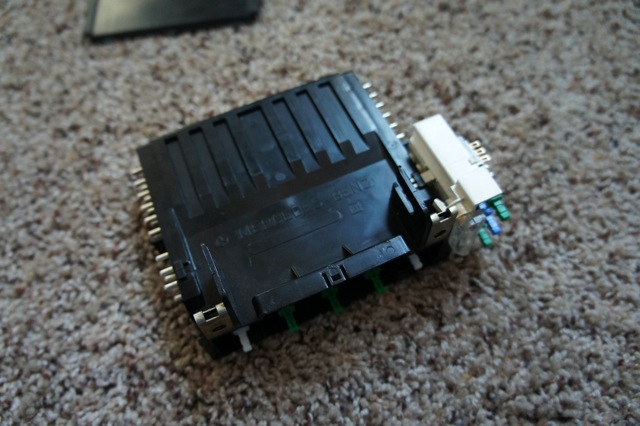 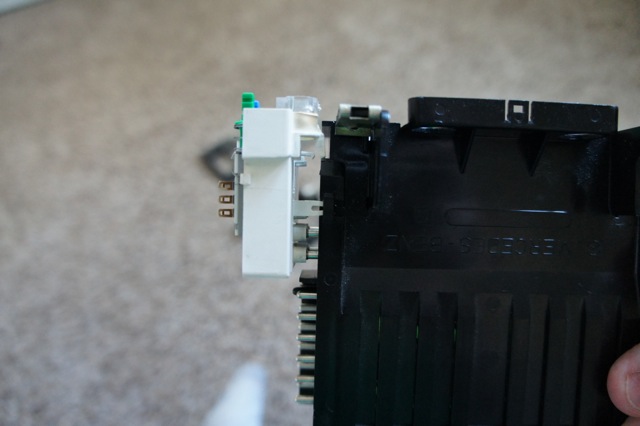 Now we have the main unit alone. Turn it so that you’re looking at the PCB, and, using the tape-wrapped flathead, pivot it open from the back of the unit. 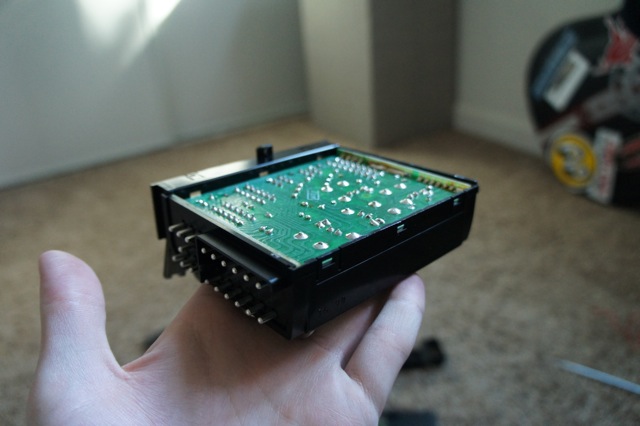 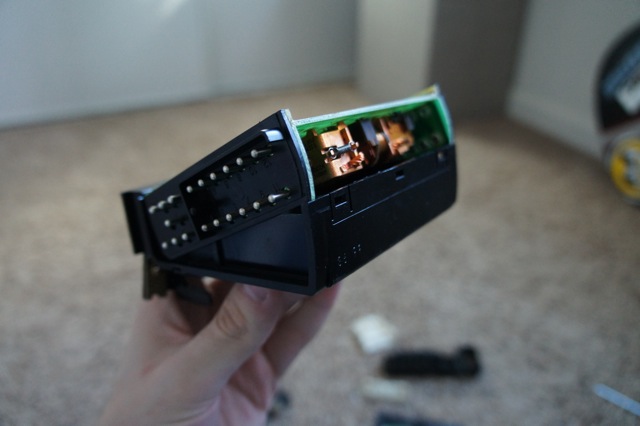 Remove it entirely. Now repair is just a simple matter of re-flowing all the solder connections that join the 90° board’s traces to the main board, on each side, and repeating this procedure in reverse. I might also suggest using something to clean the pins on the side, and using dielectric grease when you’re plugging them back in. The latter two pictures in this series show dirty and cleaned pins respectively, for reference. 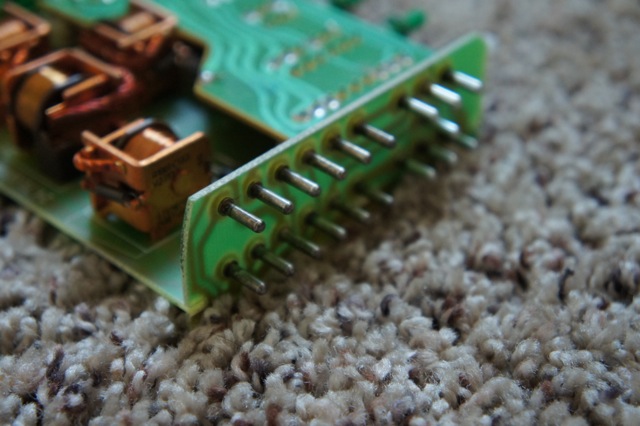 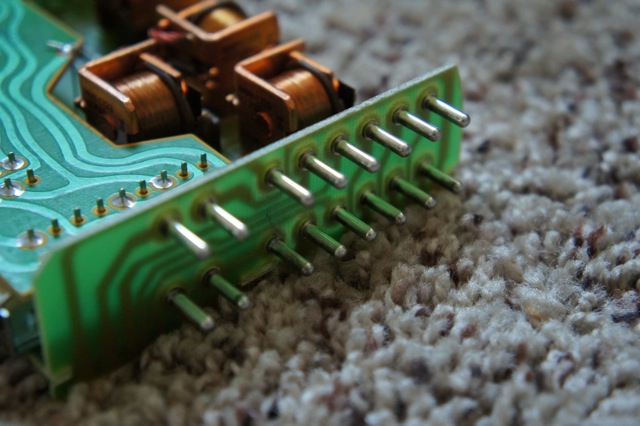