I have a few of the old colorful iBooks (a Tangerine and a Blueberry), which I like because they’re indestructible, and have a much more naïve design than modern Macs, which are quite Germanic and boring. The Tangerine is overclocked by 133mhz, has CompactFlash instead of a hard drive, and I re-celled the battery so it can get about 12 hours of life. It makes a great simplistic writing machine.

Of course, the essence of technological simplicity is needlessly complicating and overthinking it, then rationalizing more nonsense purchases. I like the FireWire iBooks because the colors are nicer (it’s less translucent and more white), and I also wanted to try a shady Chinese SSD instead of CompactFlash. So I got a preposterous KingSpec 16gb IDE SSD, and another iBook, a 366 Indigo. Here’s the procedure and a little test of the KingSpec. 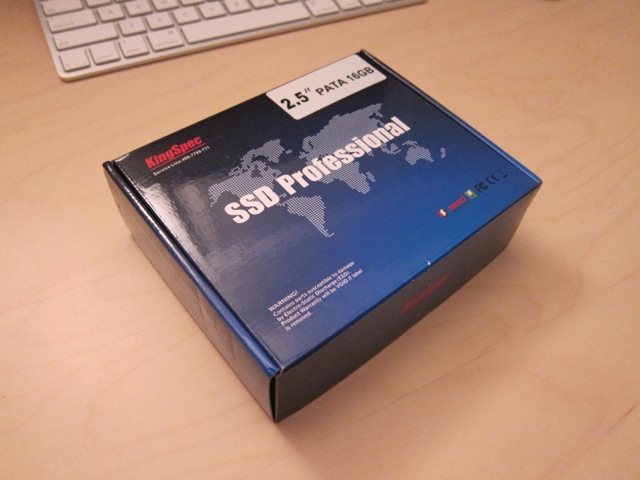 Here’s the SSD. The mark of quality… must be around here somewhere… 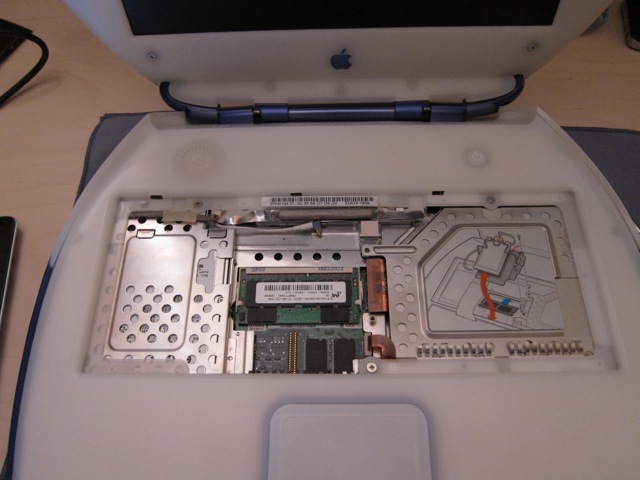 There’s the computer with its keyboard off. In a nice world you could get to the hard drive from here, but the Clamshell iBooks (and every other iBook) are actually among the more notorious Macs to re-hard drive. 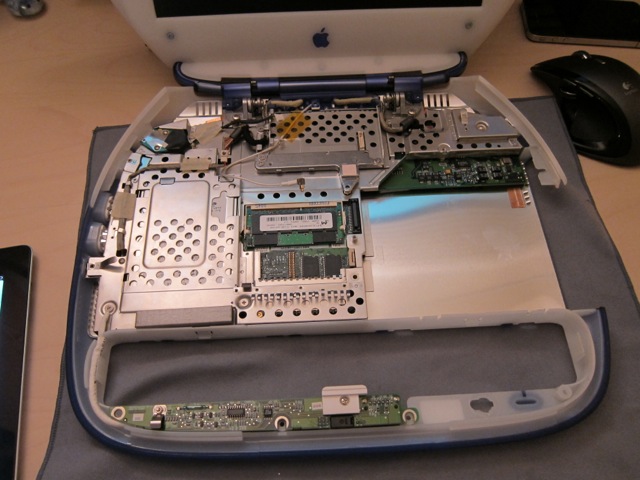 There’s the removal of the top case. Surely one can now get to the drive…. 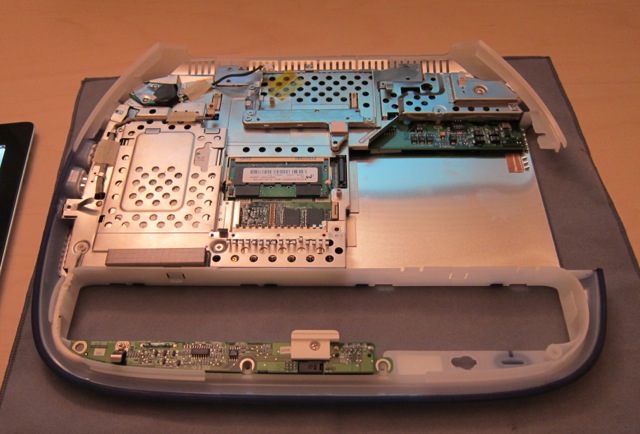 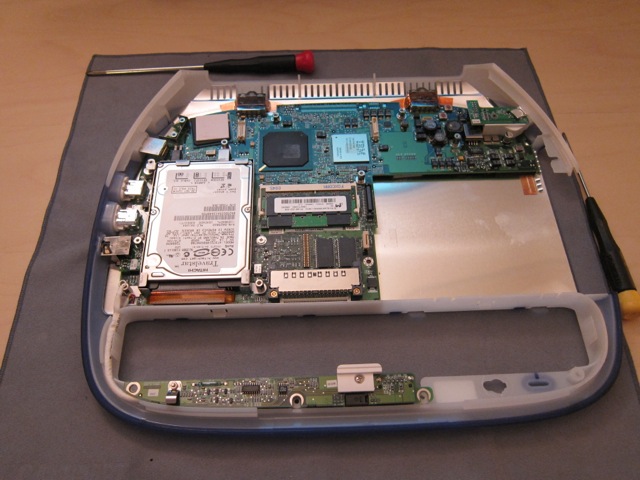 …oh. Then the EMI shield comes off. There’s the 60gb 7200RPM drive that I transplanted from a P4 2.8 Toshiba. I was going to overclock this computer to 433mhz like the older one, but Apple moved the resistors that you re-solder to do so in these second-generation clamshells, and I have no idea where they went.

At this point, I became paranoid that the Chinese SSD was playing cards, or nothing, so I took it apart. 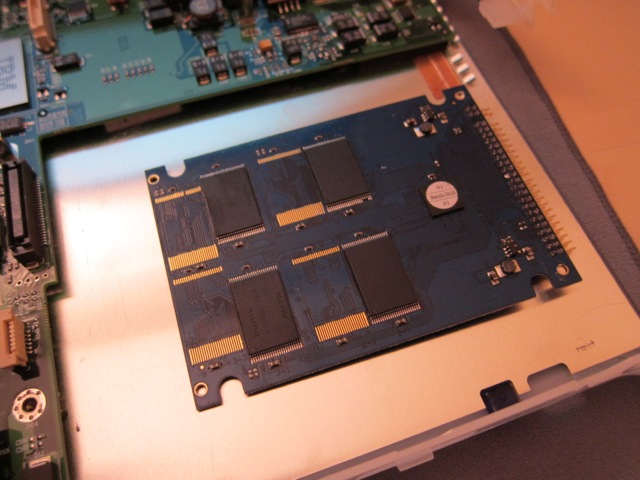 There was actually real memory inside there. And it’s from Hynix, a brand I have heard of! I didn’t take the sticker off the controller to see who made that (I thought it might let the ghosts out). It isn’t JMicron, though. 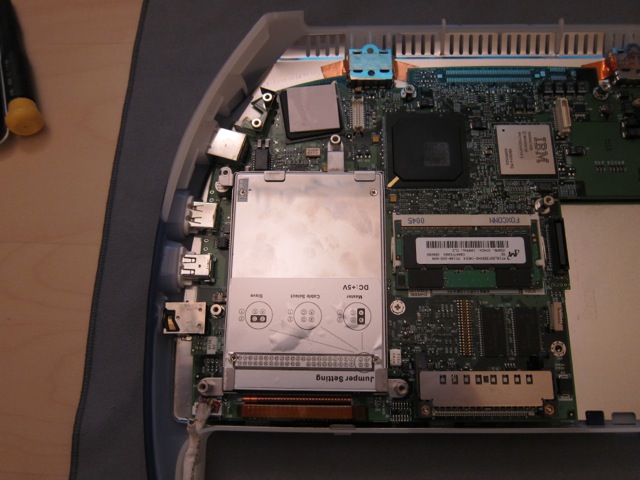 There, now it’s in. I got this down to about 50 minutes from start to finish, so it doesn’t seem that hard. Putting the display back on is kind of annoying because the clutch cover has to go over some tabs, but it’s not bad. 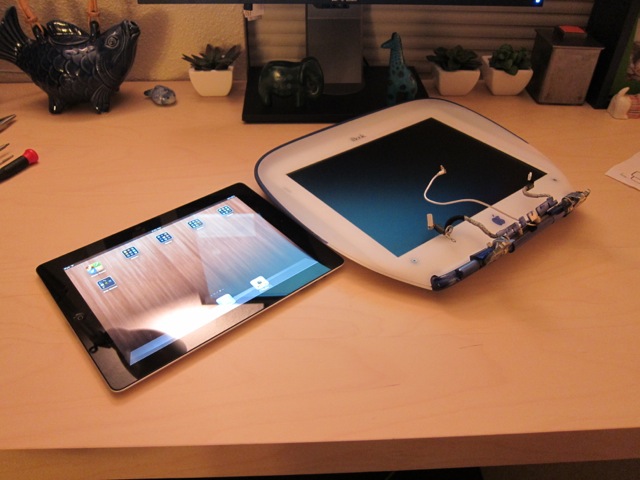 Hmm.
Anyway, then I tried it out. It starts reasonably quicker—49 seconds from power-on to opening a browser, compared to 1:35 on the hard drive. The battery meter on the OEM battery jumped from 3:55 to 6:20, 13 hours on my custom battery, and of course it’s also silent. Here’s the XBench score; SSD on the left, HDD on the right.

You can see the SSD is a lil’ faster with small sequential writes, slightly slower with sequential reads and big seq. writes, and way, way quicker with random reads. That’s nice, because random reads are what a computer spends most of its time doing. For modern comparison, here’s my MacBook Pro’s 500gb 7200RPM SATA HDD (on a much faster bus, of course):

So the cheap Chinese SSD may have an awful controller, but it overpowers a modern HDD by a factor of 10 in small random reads, and that’s handy for making a computer feel quick. Although this one’s pretty CPU-limited. It’s a lot quicker than the CF “SSD”. So I’m pretty happy with this experiment. It runs OS 10.4 and WriteRoom just fine. My rationalization for keeping the other iBooks around will be “emergency Starcraft 1 LAN party laptops”. That actually happens sort of frequently around here, so I am being prudent.