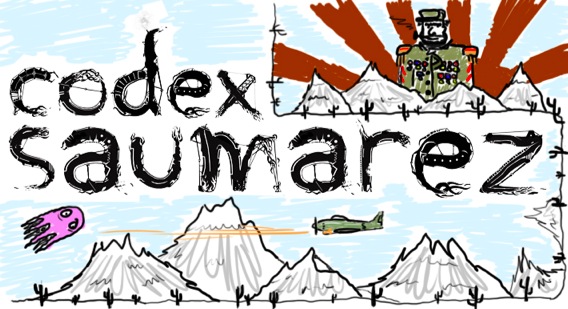 I will tell you two stories of El Generalissimo Ernesto R. “Mad Dog” Saumarez, Uniter of the Americas and Guardian of the Red Shield.

Antarctica was originally connected to South America by a wide land bridge, which was used by Perjtak, King of the Southern Seals, as a smuggling route. Perjtak’s influence began to spread northwards, and El Heneral Saumarez (who was, at that time, merely Guardian of The Chiles and The Tamer of Brazilia) took note. He knew he could not mount an attack on Perjtak’s citadel at the South Pole, as there was not a man in Saumarez’s army who was his equal, and temperatures at that time regularly reached Absolute Zero. “The world, she betrays me!” Saumarez thought to himself.

The situation grew more and more annoying. “The world betrays me,” said Saumarez, “but I may shape the world!” He walked south, towering over the mountains, crashing through the fields, and came to a place where the world began to grow more ugly, more… Antarctic-ey. “This is where the world ends,” Saumarez declared. He pulled out his Police Special and shot the ground, once. That hole began to erode more and more, and the waves crashed in as the ground subsided. Within a week, there was a fiendish ocean where the land bridge once was, and Perjtak was cut off from civilization. The end of the Southern Americas is now called “Tierra del Fuego,” in tribute to the power of Saumarez.

Things were peaceful. Then, two years later, while on patrol, Saumarez spied a Septapus cruising at 12,000 feet. He engaged it, and the Septapus banked to attack. Septapus attacks are heavily traditionalized, as noted by P. Q. Rellbudine OBE in his book “Dogfighting Practices of the Tentacled Ones.” They will make head-on approaches to maximize closing speed, then—just as their adversary passes them—they will vent their forward gas bladders to equalize speed and expel their deadly aft ink. The ideal human defense is “THE KRUGER TWIST,” where one engages the tentaculo in its preferred head-on position, but flies inverted. As the pass occurs and the tentaculo vents its gas bladders, one makes an inverted loop. This puts the fast part of a loop first (as opposed to a non-inverted loop), and the slow, climbing portion brings one’s guns to bear on the octopus as it reorients to confirm its kill.

El Heneral knew this. He flew straight at the Septapus, .50-caliber machine guns blazing, but steered right at the Septapus’s oncoming purple dome. He ejected as the two were five feet away going a combined 2400 KM/h, and floated down to Saumarez-Sud Airbase, where his martini awaited him. “El Heneral, why did you not just perform THE KRUGER TWIST, and make another pass?” his crew chief and tertiary beatbox asked. “Wladimir. Cowards make two passes. I make one pass. I am Saumarez,” Saumarez said, and took a nap.